Waiting on the Moon, again 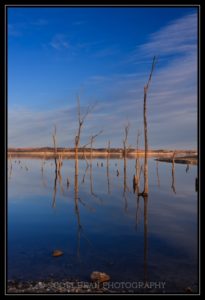 Sticks in the Water

Earlier this month I decided it was time to try and photograph another moon rise. Checking The Photographer’s Ephemeris I found that the moon was going to rise over a nice little cove on Tuttle Creek Lake.  The cove is not far from my house and filled with really interesting dead trees (only a photographer could say that not sound too weird, right?).  Perfect for some moon rise photography.  I arrived at the cove well ahead of when the moon was supposed to make it’s appearance so I did a little scouting of the area.  It was a nice still day, a great time to shoot some reflections of the trees in the cove. 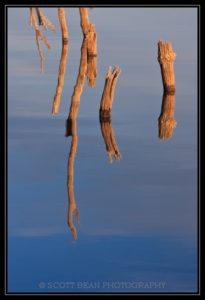 After making some wide angle landscape shots of the cove like the first photo in this post, I switched to isolating some of the trees in the cove and their reflections. 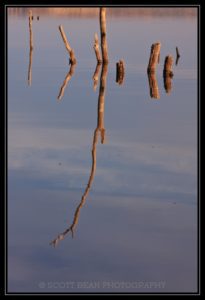 It was interesting looking at the trees in the water through a telephoto lens. It looked like the trees were floating and was a little disorienting.  After I got home I wished I had zoomed in closer and really isolated some of the smaller trees in the cove and their reflections.  I think I could have made some really interesting abstract type photographs doing that, guess I will have to go back for that! 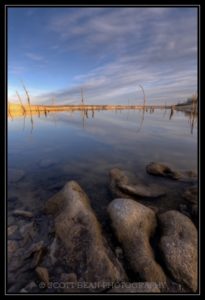 As the sun started dropping below the hills behind me, the sky started to pick up a bit of color. I switched back to a wider angle lens and started working my way along the shoreline making photographs of the rock formations in the foreground with the cove and sky as my background. I really liked how the sky was looking with the interesting clouds that were moving in.  It was about this time as I was really noticing the clouds when I remembered why I had come out tonight with my camera…for the moon rise! Lucky me the clouds were the heaviest right where the moon was supposed to show up.  Sigh.

Well if life hands you clouds when you didn’t really want them…keep making landscape photos!  (I never have really liked lemonade anyway, yuck). So I continued to work along the shoreline looking for interesting rock formations to photograph. 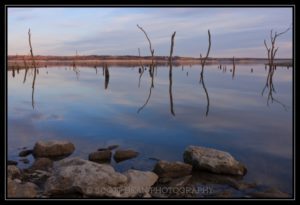 I could see a bit of the sunset behind me and it looked like it was a really colorful one. Often times the eastern sky will pick up some of the color from sunset and I did get a bit of color to work with.

All of the Cove

I’ve photographed this cove a handful of times now (and blogged about here and here). The trees in the cove really do make for interesting subjects (and I’m lazy and it is close to home).  I’ve tried a few times now to make a pano of the cove and haven’t been happy with the results.  On this night though, the sky was interesting enough and reflecting well in the cove that I thought the pano turned out pretty good. 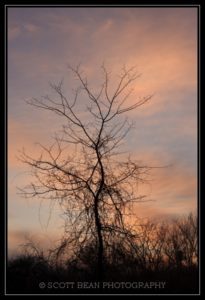 When I left the cove and walked back up to my car I got a good look at what was left of the sunset that had been behind me.  Looked like it was a good one judging from its remnants.  I spent a little bit of time photographing some tree silhouettes before calling it quits for the evening. I really like photographing trees in the winter, you can see their shapes so much better.

I didn’t get my moon rise photo and it looked like I was shooting the wrong way during a really colorful sunset but I still enjoyed my evening. The good thing about moon photography is that you will always get another chance soon!