I’m going to be making some changes to my blog in 2011 and one of the things I’m planning on is to have several ‘categories’ of blog posts that I make on a regular basis.  One of these is going to be “making of” posts where I talk about the making of 1 photograph.  This idea isn’t a new one by any means, and is partially inspired by the book “Examples: Tthe Making of 40 photographs” by Ansel Adams (which I highly recommend).  I’ve been wanting to do this since reading some blogs where other photographers have done this.

So to get things going, I thought I would start off the ‘making of’ category with a discussion about making a photograph of the last sunset of 2010…

Last year I had gone out and photographed the last sunset of 2009 (and coincidentally, a blue moon rise) so I decided to try and get the last sunset of 2010 (I think maybe this will be a new tradition for me).  I decided that I would drive out along Deep Creek Road (link to my last post on this area) and try for a photograph of the sun setting over a nice wide open view of the Flint Hills.

I was a little late getting out to the location I had in mind, due to an unintentional detour almost to Pillsbury Crossing (forgot where I was going!), and by the time I started looking for a good location the sun was already setting.  I initially had planned to try and find a draw running through the Flint Hills where I could get a sunset shot and hopefully some nice shadows and textures on the hills, but nothing was turning up. I tried one location but it just wasn’t working for me and I was shooting right into the wind, which was freezing cold! I quickly retreated to the car and moved on down the road.

I thought maybe I was going to come back empty handed as I drove down the road, but just as the sun was sinking below the horizon I spotted an interesting tree near the sun. 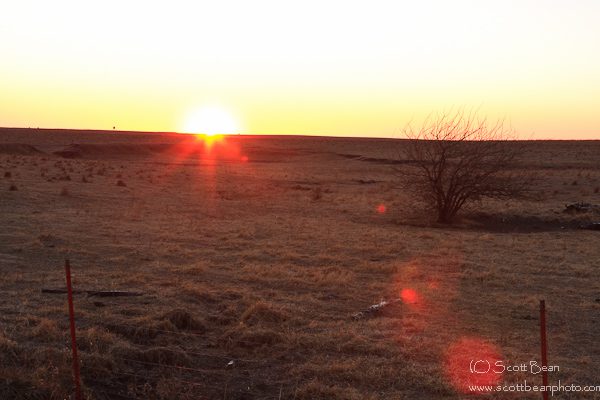 I made the photograph above just as I stepped out of the car. It was taken with ~50mm focal (35mm equivalent) which is roughly the field of view a person can see. I did this to document roughly what I was seeing.  You can see the tree that caught my attention and the sun, but at this focal length they are pretty small in the scene.  There is also a fence running through the foreground that is distracting.

The first thing I decided to do was to zoom in to make the tree and the sunset more prominent and to get rid of the fence running through the bottom of the scene.  I also wanted the sun to really have a nice ‘star burst’ effect and for that I needed to stop my lens down.  The more you increase your f-stop (the smaller you make the opening through your lens) the greater the star burst effect you get.  In this case I set my lens to f22..compare the 2 photos above, the one on the left was made at f8 and the one on the right f22.  You can see how the star burst is much stronger at f22.  The same thing that gives you that star burst effect, diffraction, also causes a loss in image sharpness, but this case that is ok.  I really wanted the star burst to stand out and there aren’t a high lot of fine details in this shot, so a little loss in sharpness is not a big deal.

There was only one last thing to deal with for this picture and that was the issue of dynamic range.  In all the photographs so far, the foreground has been exposed ok, but the sky is almost completely blown out.  My camera’s sensor cannot record the range of light in this scene and be able to record detail in both the sky and foreground (which I can easily see with my eyes).  I can fix this either using some split neutral density filters or combing multiple exposures using high dynamic range (HDR) imaging.  I almost always prefer HDR to filters and as cold as it was, there wasn’t any way I was going to take the time to dig out my filters.  So I took 4 different exposures (pictured above) and combined them into 1 using Photomatix. 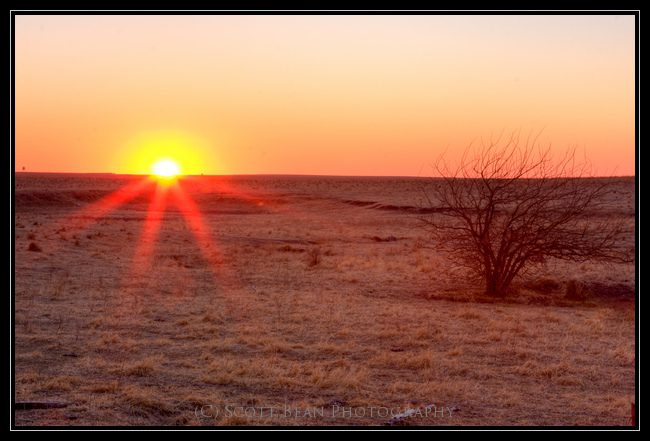 After putting the HDR together in Photomatix it was re-imported into Lightroom for some minor tweaks and cloning out some lens flare in the foreground.  The final result is above. Certainly not a spectacular shot, but I think it turned out given the conditions and the location I selected.  The tree does not stand out as strongly as I perceived it while standing there.  But it does serve to add a bit of visual interest.

I also tried a couple of slightly different compositions, one where I moved closer to the fence and zoomed in and another where I zoomed out a bunch. I didn’t like either of these included below) as much as I did the first composition.  The sun was farther down below the horizon at this point and the star burst effect wasn’t as strong. I really liked how it ‘reached’ into the first photograph.  At this point the sun was almost gone and my face was frozen, time to get back in the car and head home! 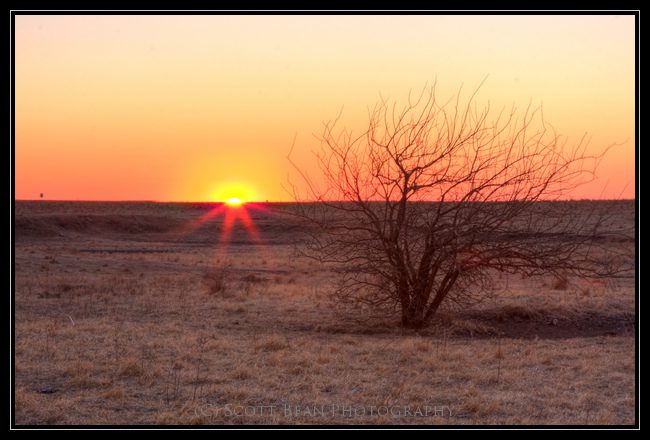 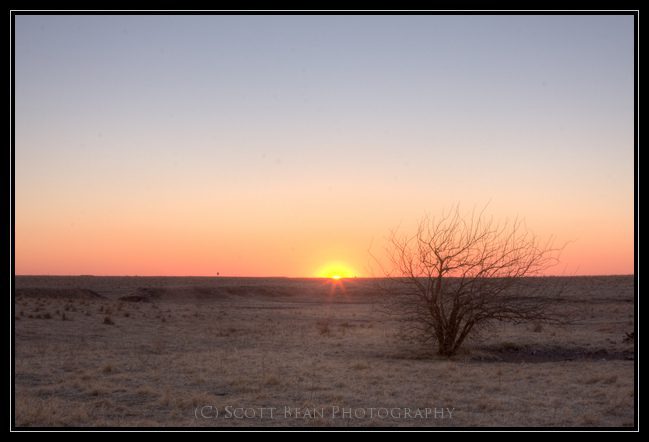