Fly Me To the Moon…finally a moon rise! 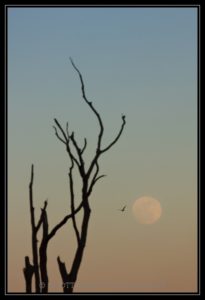 Fly Me to the Moon

Persistence (that’s such a much nicer word than stubbornness) paid off this time. No clouds to hide the rising moon and still conditions…perfect.  As an added bonus several birds (gulls mostly I think) were flying around the cove and made for some great subjects to pair with the trees and the rising moon.  As the moon first came over the horizon I composed the moon with some interesting trees and then waited for birds to fly by. 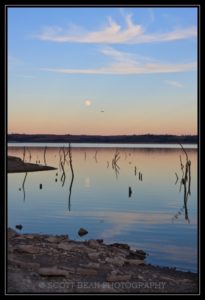 As the sunset started developing in the west, the sky in the east, where the moon was rising, started picking up color as well.  With the still conditions I has some nice reflections to work with.  A colorful sunset is always good to photograph, but the other side of the sky will often be just as dramatic. 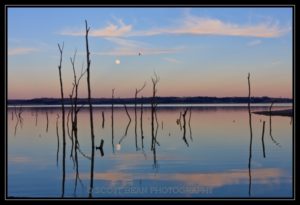 To The Moon and Back

With the all the interesting trees out in the cove I had lots of compositions to work with just by working along the shoreline of the cove. 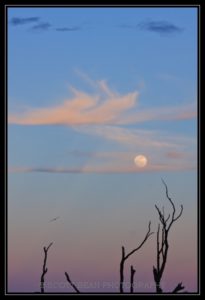 As the moon continued to rise it started moving behind some clouds on the horizon which I thought made for some interesting photographs, especially with the birds still flying around the cove.  I had envisioned photographs of the moon rising above the trees in the cove, but had no idea the birds would be in the area. I was glad they were and glad that they stayed out the entire time I was photographing.  They really added to the photographs I was making. I ended the evening with some wider angle shots of the moon over the cove.   Most of this cove is pretty bare right at the shoreline, but at one point there are some rocks near the water’s edge.  I liked this composition with the rock in the foreground paired with the moon on the other side of the frame. I thought it made an interesting composition, especially given that the moon is just a (really) big rock in the sky.

This was another great trip out to Tuttle and a very peaceful evening. And all this only about 10-15 min from my house. It took me several trips to this cove to get the moon rise photographs I had visualized but it was worth it.  Going back to a location over and over again may be necessary to create the photographs you want.  I think this is more common in landscape photography than many people think.  I’ve read stories of people hiking several miles to mountain lakes before dawn for several days in a row before they get the conditions they wanted.  A lot of times you get lucky and conditions are great when you are out with your camera, but there is a degree of persistence required… to make time to go out with your camera at the right times and to also be willing to revisit locations again and again.  For me, and I would imagine most nature photographers, revising locations is not much of a sacrifice, it is actually a joy.

I used a couple of different lenses for these photographs ranging in focal length from 24mm to 250mm. I was using my telephoto lens to isolate tree trunks and the moon while waiting for birds to fly by for the first photograph and a wider focal lengths for the landscape type shots such as the last photograph.  The contrast range of the light wasn’t that wide on this evening so I didn’t need to use HDR for any of these shots. HDR’s would have been difficult in any case with the birds moving in and out of my shots.  I started the evening with my ISO set a 100, but later as the sun dropped and it got darker I had to bump the ISO up to 400 so the birds flying through my scenes weren’t blurred especially on more landscape style shots were I needed a bit more depth of field than I could get with my lens wide open. Stopping my aperture down to f8 or so meant losing a bit of light and thus a slower shutter speed. Increasing the ISO let me “buy” back that shutter speed.