Last night we had some really thick fog move in and I had plans of getting up early this morning with the hopes of finding the countryside covered in hoarfrost.  Turns out it was too warm last night so nothing really froze (probably a good thing, slick roads aren’t really that good of a thing).  It was about sunrise when I got myself motivated to look at the window and check on the conditions.  The sky was completely overcast and the dense fog from the evening before was still around. I was grumbling about the conditions and I had just about convinced myself to go back to bed when my wife gave me some good advice “you are already up, you might was well go see what it is like.”  I’m glad I listened to her.  Even without the hoarfrost and any sun to speak of it was a beautiful morning.

I was hoping that the fog wasn’t thick enough to obscure all the hills and I had visions of wide open landscape photographs with the Flint Hills disappearing off into the fog.  However, once I got out of Manhattan it was apparent that wasn’t going to be. I couldn’t even hardly see the Flint Hills as I drove through them the fog was so thick.  As I drove up Deep Creek Road I came across some cattle being fed and decided to stop and make some photographs.  The cattle were a bit ghost-like seeming to just appear out of the fog.

After almost getting stuck on an icy stretch of Old K-18 and driving into some fog so thick I could barely see the road side, I decided it might be smarter to try another location so I drove back into Manhattan and to the River Ponds below the Tuttle Creek dam.  The birds still in the area made for some interesting subjects in the fog. 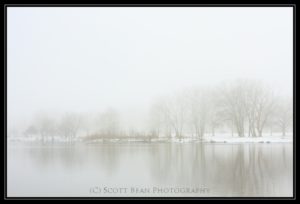 This last photograph was probably my favorite of the morning.  I had been searching for some interesting foreground subjects to photograph along with the trees off in the distance, but I just didn’t see anything that interested me.  So instead I decided to just focus on the distant trees and their reflections in the water.

Photographing fog can be a little tricky, most of the time you will need an over exposure of 1 to 2 stops to avoid getting neutral gray fog (fog is normally a bit brighter than neutral), but you need to pay attention to what your camera is reading light from.

Next time you aren’t sure if you should grab your camera and head out the door take my wife’s advice “You might as well go see”…you never know what you might find.

Category: From the FieldBy ScottFebruary 27, 2011
Go to Top
We use cookies to ensure that we give you the best experience on our website. If you continue to use this site we will assume that you are happy with it.AcceptPrivacy Policy