Welcome to winter – shooting on the solstice (almost)

The last couple of years I’ve been trying to make sure I’m out making some photographs during the solstices. Seems like winter solstice is easy to miss…it has some stiff competition for attention with Christmas only a few days away (interestingly solstice is tied to a number of holidays). And lets face it, not many people are that interested in the first official day of winter.

Winter solstice marks the shortest day of the year and the beginning of the days getting longer. Increasing day length is a good thing in my book, the later in the day the sunset the better. I hate walking out the door of work only to see the end of a beautiful sunset.

This year conditions were pretty good for me to go for a solstice sunset shoot. Except that solstice officially occurred at 11:30pm on December 21st in the central time zone and December 22nd for time zones east of the central time zone. Not much of a sunset at 11:30 at night.  So despite my good intentions, my ‘solstice’ sunsets are actually the day after solstice…oh well there is always next year.  Next year’s winter solstice might be more than just a solstice to photograph, I might be photographing the end of the world at the same time!  I have my doubts about that though, the calendar on the wall in my office ran out of dates yesterday and the world didn’t end (at least not that I’ve heard yet).

For my sort-of solstice sunset, I decided to go to the river ponds area below the Tuttle Creek Dam.  The lines across the lake here made for an interesting composition to go with the setting sun.

While the first photograph in this post was made literally in the parking lot, I did venture down closer to the water to catch the last of the sun as it went down. 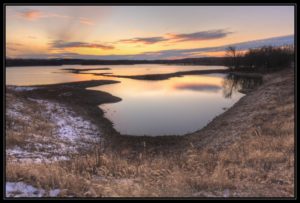 From the Parking Lot

Because it was getting pretty damned cold at this point (it was the first day of winter after all) it was back to the car and one last photograph this time with a wider angle to take in more of the river ponds.

On the way home I did get the chance to photograph some bald eagles making their annual over winter stop in the area.  I love watching the eagles when they are here in the winter.

If you haven’t seen the eagles before it is worth a trip out to the area lakes to look for them.  All in all not a bad way to spend the first (or second, I’m still not sure) day of winter.

Category: From the FieldBy ScottJanuary 1, 2012
Tags: eaglesRiver PondssolsticeTuttle Creek Lake
Go to Top
We use cookies to ensure that we give you the best experience on our website. If you continue to use this site we will assume that you are happy with it.AcceptPrivacy Policy