A Weekend for wildlife watching 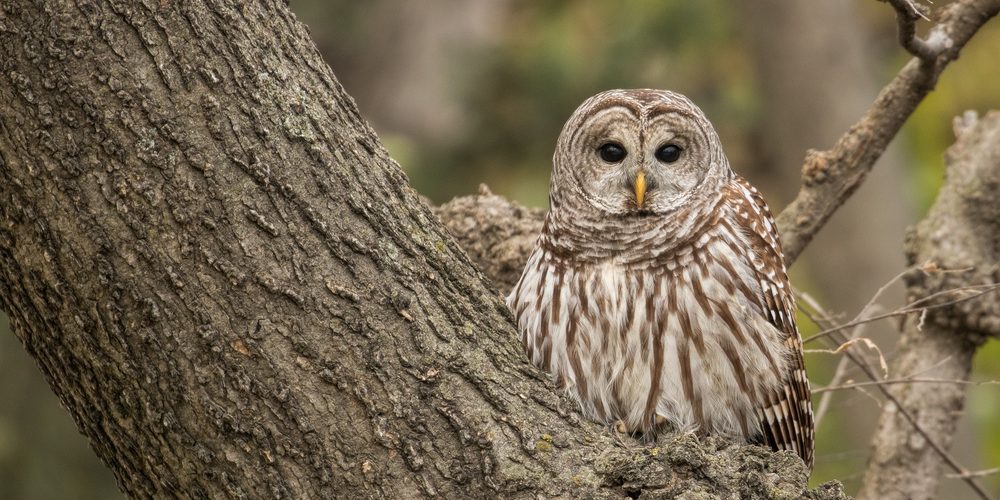 This past weekend I made several trips out and about with my camera. A lot of my photography lately is done on weekend trips with my wife. We like to load up our dog and head out for drives to various places nearby. We usually try to head to a location where we can get out at different times and do some walking – our dog really loves when we do that. These are fun weekends and we really look forward to them. I never know what I might find to photograph. Sometimes it is mostly landscapes that I end up shooting and sometimes it is more wildlife that we come across. This past weekend was definitely more wildlife oriented. 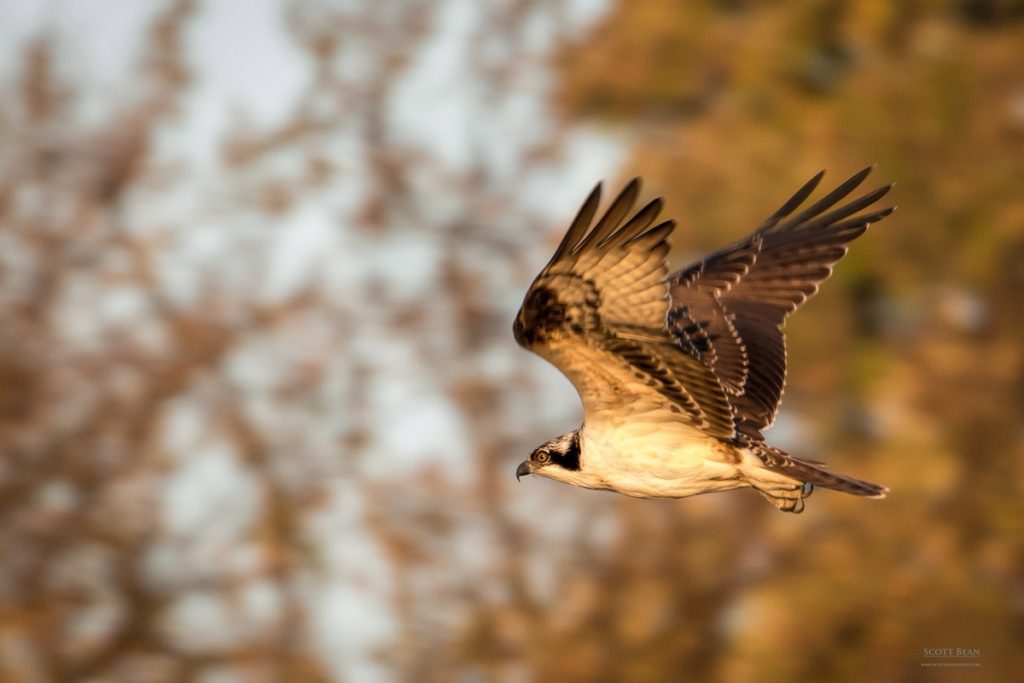 We started off with a Friday morning trip to the Pottawatomie County lake #2 not far from Manhattan. The previous weekend we ended up here after a drive through the Flint Hills and the fall colors were really starting to show up. It was a beautiful morning. While we were there, an osprey drifted right by us. I got some good photos as it slowly went by. Since then I’ve become a bit obsessed with watching the osprey. On this morning we were able to spend some time watching and listening to the osprey and I was lucky to have another chance at photographing it in the first light of sunrise. What a beautiful, magnificent bird. I really want to be able to see the osprey fishing some time.

Later in the morning on Friday, we made a trip over to Milford Lake and stopped by the Milford Nature Center. This is always a neat place to visit and if you are in the area I recommend a stop by. As we were leaving the Nature Center, we noticed several hawks soaring in the updraft along the dam. It was great to see so many hawks in one spot and when we went across the dam some of the hawks seemed like they were right outside our car. It was a neat experience.

Just as we were about to turn into the state park area along Milford Lake, we spotted the largest coyote I’ve ever seen. I wasn’t able to make any photos of the coyote before it disappeared into some trees along the road though, but it was great to see. I hope I’m able to come across it again some time and make a few photos of it. 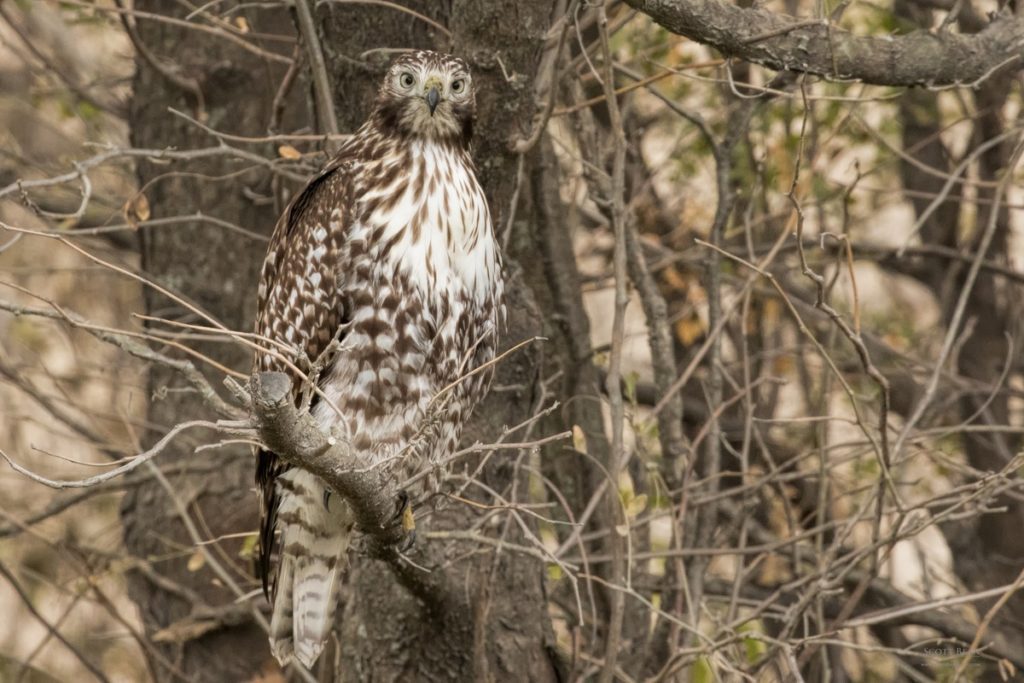 Our next trip out was Saturday evening. I wanted to go back to the Pottawatomie County Lake and look for the osprey again (did I mention I’m getting obsessed with the osprey?). On our drive out to the lake, we passed this hawk sitting in a tree along the road. I made several photos of it before continuing to the lake. This hawk, unlike most I come across, did not seem camera-shy at all and it was nice having the chance to photograph it. 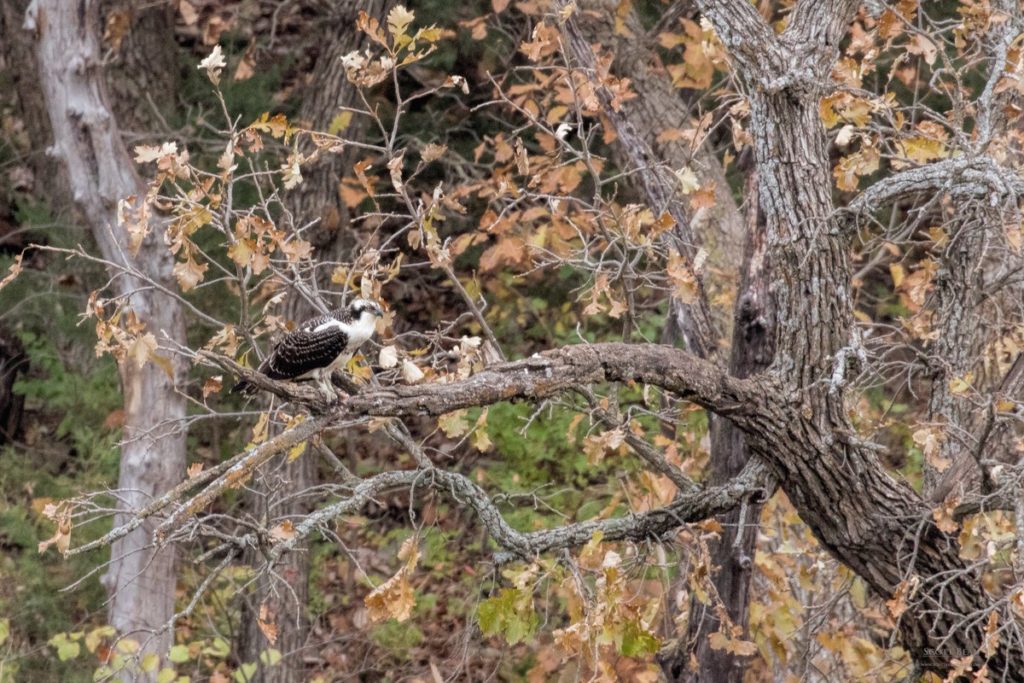 We did find the osprey again. You can’t tell in the photo above, but it has a fish and was enjoying dinner. My wife saw it fly into the tree with the fish, so we just missed it fishing. 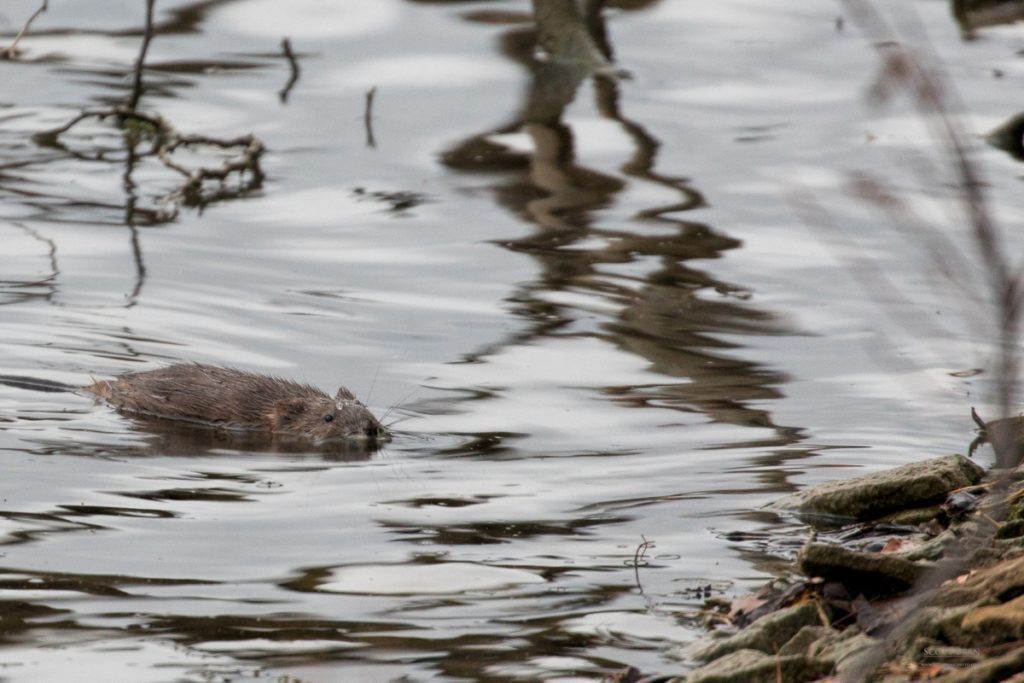 After watching the osprey for a bit, we drove around the rest of the lake enjoying the fall colors present.  Just as we were about to leave, we spotted two muskrats swimming near the shore. Last year we regularly saw one muskrat in this same area of the lake in the fall and winter. This was our first muskrat spotting of the season though and it was neat to see two of them there. 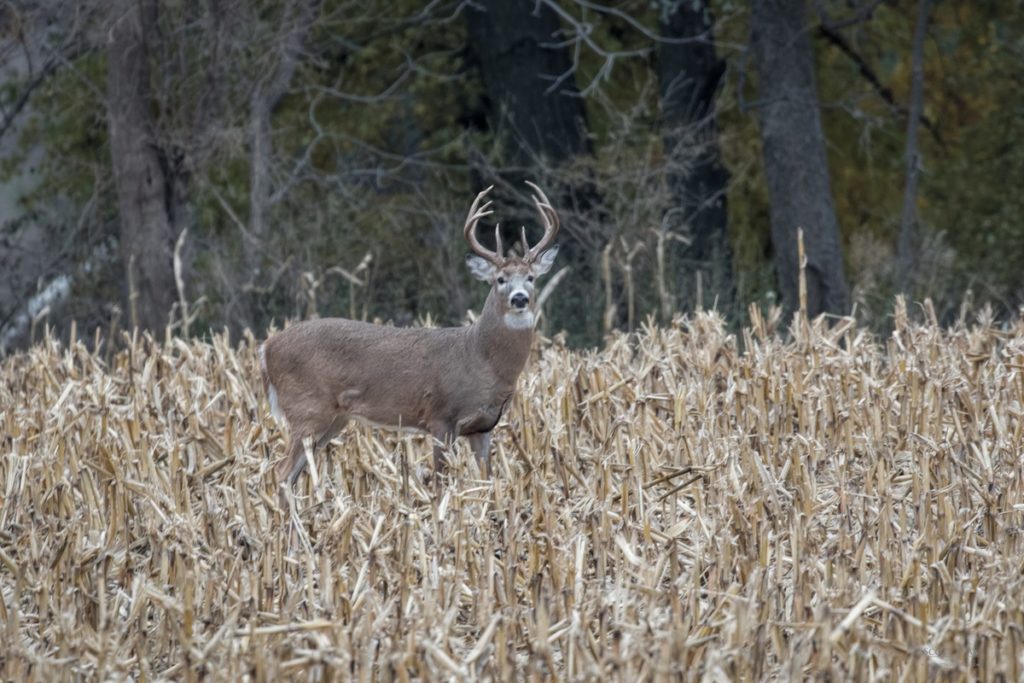 Sunday morning, we once again headed back to the Pottawatomie County lake to look for the osprey (I did mention I’m obsessed with the osprey, right?). On the way out to the lake we saw a few deer near the road including the buck in the photo above. We had seen several deer along this road over the weekend, but this was the first time I was able to get a photo of one. It was still pretty dark out when I made this photo and I had to use a higher ISO and a slower shutter speed than I would have liked. The photo is not perfect by any means, but these trips aren’t always about getting perfect photos. The photographer in me still gets grumpy about that sometime, but I’m learning that the experiences are more important than the photographs. 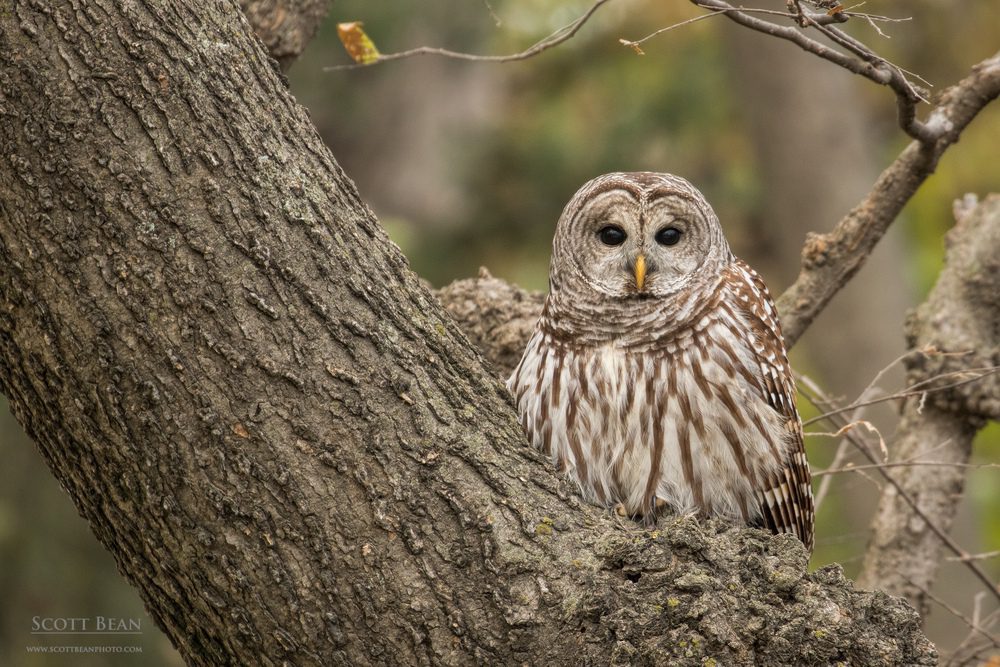 We did get to watch the osprey again Sunday morning for a while and spent some more time enjoying the fall colors at the lake. This lake (Pott 2 as I normally call it) it is a really pretty lake and the fall colors have been great this year. I’ll share some of those photos in a future blog post. Leaving the lake, my wife spotted an owl in a tree right along the road. I quickly backed up and was able to get some nice photos of the owl. Owls are always a treat to spot and it was great to be so close to this one. Another great experience. 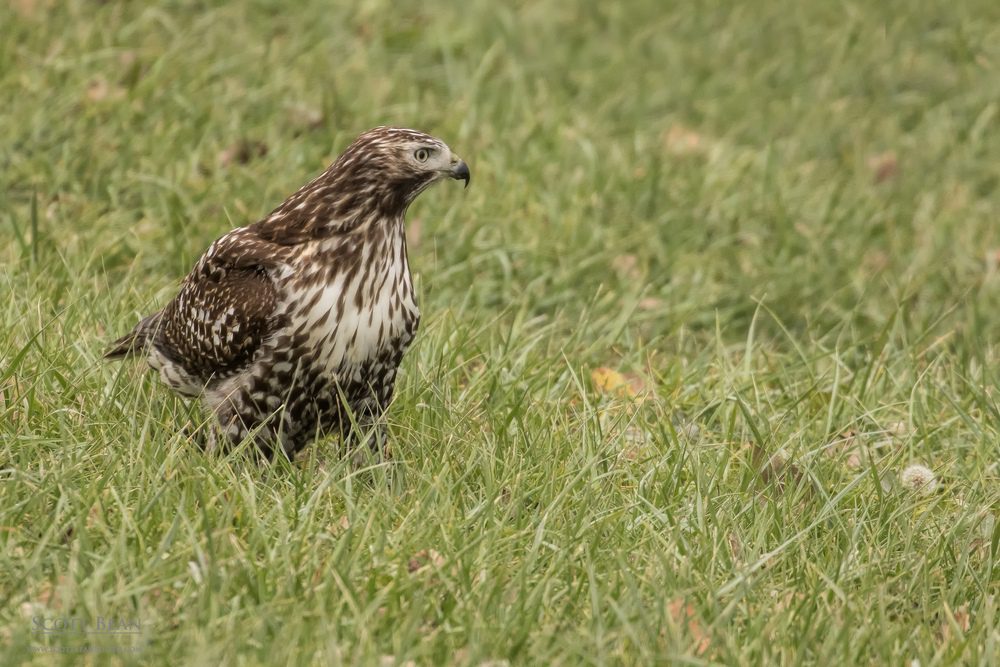 Later on the road back home from the lake, we spotted a hawk again in the same location as we did on Saturday evening. Looking at the photos, it looks like it might be the same hawk. This time it was down on the ground, maybe from an attempt at catching some breakfast?

This ended up being a wonderful weekend with some great experiences watching wildlife. We ended up seeing the osprey several times, several hawks, deer (included two bedded down surrounded by a flock of turkeys), muskrats, a coyote, an owl, an adult bald eagle, several different types of ducks and numerous small birds. And we got to see some beautiful fall colors. Not a bad weekend and lots to be thankful for.

As always, thanks for stopping by and if you would like to be notified of new blog posts, print sales, shows, etc. please sign up for my email list. You can see more of my wildlife photos in my wildlife gallery on my website.

Category: From the FieldBy ScottNovember 7, 2017
Go to Top
We use cookies to ensure that we give you the best experience on our website. If you continue to use this site we will assume that you are happy with it.AcceptPrivacy Policy