This past Monday I was feeling the need to get out somewhere with my camera and photograph something. Last weekend I didn’t make it out and was starting to go through withdrawal. 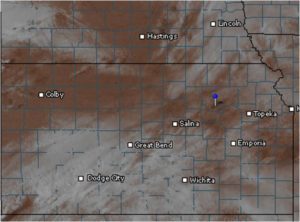 The temperatures were not ideal (it was cold, cold, cold) but I had a partially cloudy sky to work with and the satellite view (shown above) showed broken clouds throughout the area. Just right for a chance of a really colorful sunset developing.

A quick check of The Photographer’s Ephemeris showed me that the sun would be setting just right over either the River Ponds or down a cove just off the dam at Tuttle Creek Lake (shown above-the orange line is the path where sunset would be visible if standing at the red balloon and looking west). I was leaning towards the cove at Tuttle Creek Lake, but this would mean a short hike and I was feeling kind of lazy so my initial plan was to go to the River Ponds. However, as soon as I drove onto the dam at Tuttle I changed my mind. 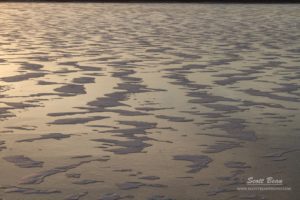 Patterns On The Ice

The lake was frozen (duh!) and was covered in some really interesting patterns of snow and ice. I thought this might make for some interesting photographs at sunset so I opted for the short walk down to the cove. 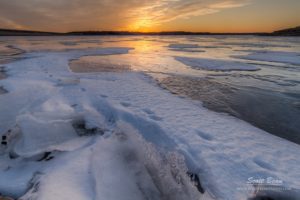 When I got down to the cove I was really glad I didn’t let my laziness rule my decision. The patterns out on the lake were interesting and I made a few photographs composed to emphasize those patterns in the foreground. 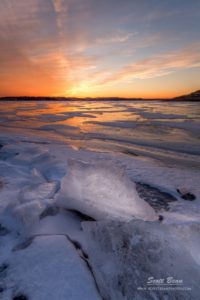 However the thing that really grabbed my attention was the ice that had formed along the shoreline. There were thick slabs of ice that had been pushed up along the shore and one of the first formations I photographed was an area where one slab had been pushed up almost vertical. About the time the sun was just starting to set the ice on the lake started groaning; I’m guessing due to temperature changes causing the ice to shift around. It was a little eerie honestly, but also pretty. If I wasn’t so close to a fairly busy road I would have shot some video just to record the sounds. 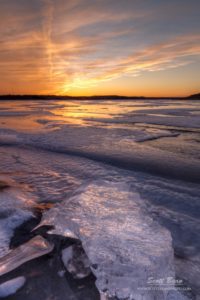 I also found a piece of ice with some really interesting patterns on the top of it. A bit of light from sunset was striking the front edge of the ice making it glow. My fingers were getting pretty numb about this point, but with light like I had this evening and the interesting ice formations I had to work with I didn’t really care (though I did wish I had thought to bring some hand warmers with me!).

I wrapped up the evening making some photos of the last bit of light reflecting on the ice including this 5 shot panorama shown above. Then it was back to the car (and the heater!). I’ve shot several times at this cove and sometimes I bring my photography classes here and almost always conditions turn out well (or at least I only remember the good conditions!). This little cove isn’t far from my house so I can get here quickly. I’ve written about the value of having “go-to” places nearby. Locations like this allow me to get somewhere quickly if I don’t have a lot of time and since I can visit them often I get very familiar with them  and I always feel like I can do my best work in areas that I know well. Hopefully it won’t be too long before I can visit this cove and have the lake not be frozen over (though it won’t be long before I’m complaining about the heat and longing for winter!).

Visit my image galleries to view more of my work and to purchase prints.

Category: From the FieldBy ScottMarch 6, 2014
Go to Top
We use cookies to ensure that we give you the best experience on our website. If you continue to use this site we will assume that you are happy with it.AcceptPrivacy Policy