Travels with Dad – A trip to the Maxwell Wildlife Refuge 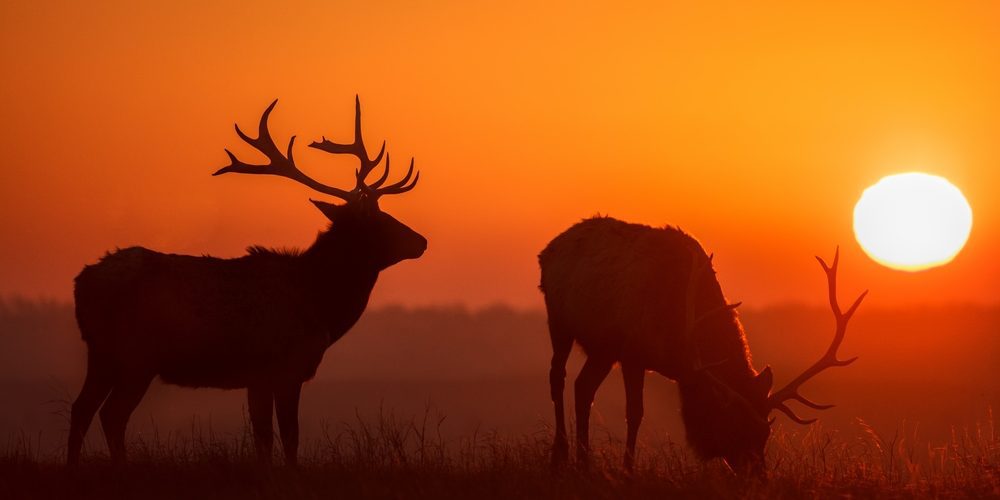 This past weekend my dad and I took a quick road trip to a photography event at the Maxwell Wildlife Refuge just outside of Canton, Kansas. The past few winters there has been a photography outing there called FYBO (freeze your buns off) which raises money for the refuge. Maxwell has a herd of bison as well as elk and the FYBO is a great opportunity to photograph both. It is also a great time to visit with other photographers and the events have always been fun. I’ve been to a couple of these events in the past, but this was the first time Dad went with me. 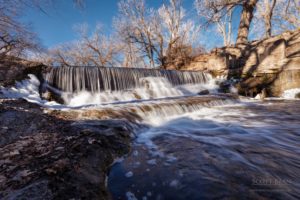 My dad and I drove down the afternoon before FYBO and made a few stops along the way. Our first stop was at the Brown Memorial Park south of Abilene. There is a small waterfall there that used to be part of a mill. I’ve photographed this waterfall several times, but it is always fun to visit. I wasn’t sure if there would be much water flowing as it has been a bit of a dry winter, but the waterfall was running better than I had hoped. The light was harsher than I would normally like to photograph in, but the photo above turned out to be one of my favorites that I have made of this waterfall. The blues of the sky and the white of the water and the snow around the edges of the falls really made for a nice, colorful photograph. 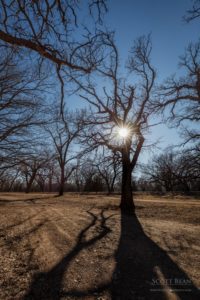 This park also has some really beautiful trees, and the ones around the waterfall have always caught my attention, though I’ve never really spent much time photographing them. As we were packing up to leave, the shapes of the trees and their shadows really stood out to me so I spent some time making a few photographs. I played around with placing the sun just peeking around the edge of the trees, which gave the photo some extra interest and drew attention to the tree. 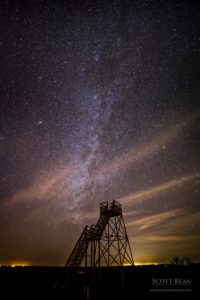 After getting settled into McPherson for the evening, Dad and I made a visit to the observation tower out at Maxwell. We went out to this location to shoot some star trails (which I’ll post later), but before we left, I decided to shoot a photo of the Milky Way rising beside the tower. The wind was really blowing and it wasn’t really a very pleasant evening to be out star gazing, but I quickly set up and made the photograph above. I’m really glad I did because I thought it turned out very well. This is eight separate exposures stacked together and the photo ended up with some really nice detail. In fact, comet Lovejoy is visible in the scene (pointed out to me after I posted the photo on Google+) above and to the right of M31, the Andromeda Galaxy. I was testing a new lens that I got just for photographing the night sky (a Rokinon 14mm) and I was really happy with how it performed. 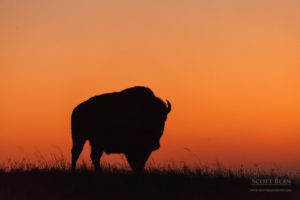 The next morning was the main event. Thanks to everyone involved in the FYBO event, we were able to be out on the Reserve photographing prior to sunrise. My first photos of the morning were of bison silhouetted in the pre-dawn sky. The bison created some really powerful silhouettes to photograph. 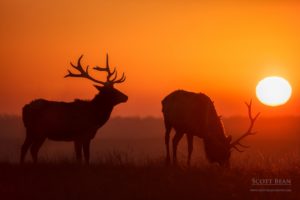 A bit later in the morning the elk arrived and their timing was fantastic. The sun had just come up over the horizon and we were able to photograph the elk silhouetted with the rising sun behind them. 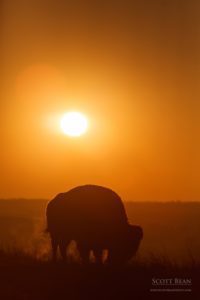 A bit later in the morning, I had the chance to photograph some bison silhouetted with the sun behind them. One thing I like about events like this is seeing how other photographers composed and photographed the morning. We couldn’t have asked for better conditions to create some nice silhouettes of both the bison and the elk and I’ve seen some wonderful photos that people at the event made. My personal favorite from the morning I was there was a photo made by Scott Branine made of the bison at sunrise: http://www.facebook.com/photo.php?fbid=784564131631879&set=gm.10153121535634579&type=1&theater. There were a lot of really nice photos made by everyone though.

If you are on Facebook and want to find out more information about events like this at Maxwell, check out the Fans of Maxwell Wildlife Refuge. You can also see photographs from several of the photographers that attended FYBO (both the weekend I was there and the weekend before). My dad and I both had a great time and a huge thanks to everyone involved in making these events happen, I know there is a lot of work that volunteers put into these. 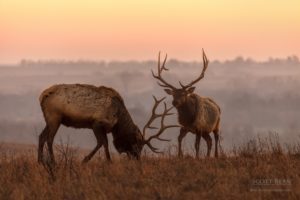 Category: From the FieldBy ScottFebruary 12, 2015