Time with the bald eagles this season 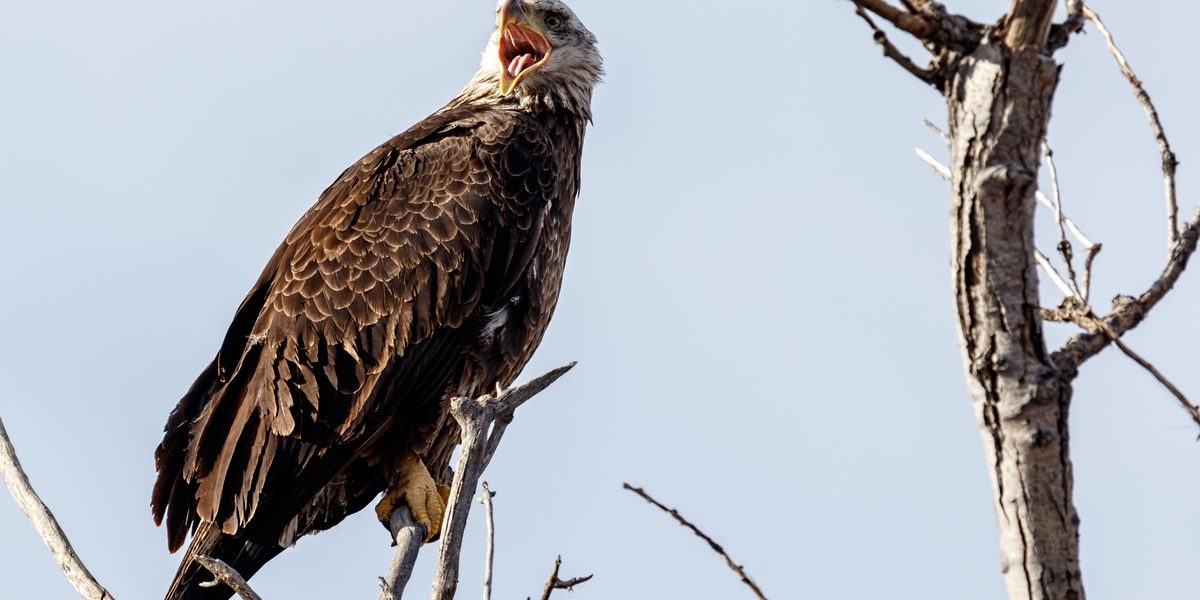 Photography has helped me be more in tune with the cycles of the natural world around. As these cycles change, so do the photography opportunities around. Since I’ve been doing this for several years now, it has been interesting to see how the cycles themselves have changed (not always for the better).  This time of year, I’m waiting for Spring to arrive and all the changes that brings to the world. I do like winter though and will miss the unique photo ops that the winter season brings. One of the things I will miss the most about the change from Winter to Spring is the bald eagles leaving the area. 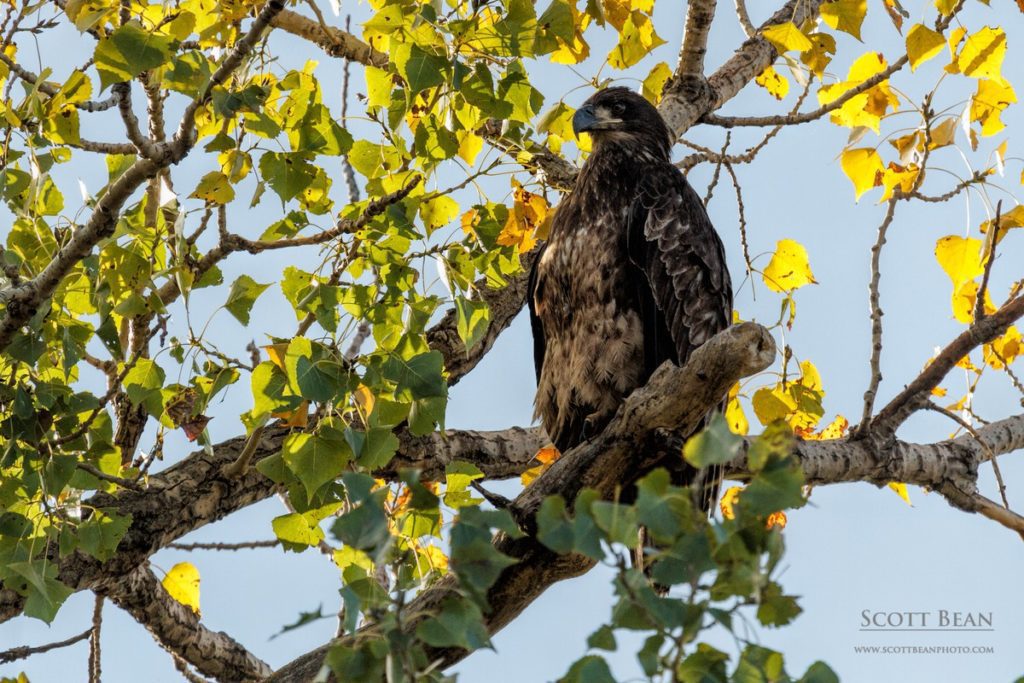 This year I first came across eagles much earlier than normal. On September 19th I was headed to the River Ponds for an evening of photography when I spotted this juvenile bald eagle perched in a tree at the edge of the road. In the winter, this tree seems to be a popular place for eagles to sit, but this was the first time I had photographed an eagle here with leaves still on the tree. I’m curious if this juvenile was hatched this year at one of the nests at Tuttle, especially given the pair I photographed shown below. 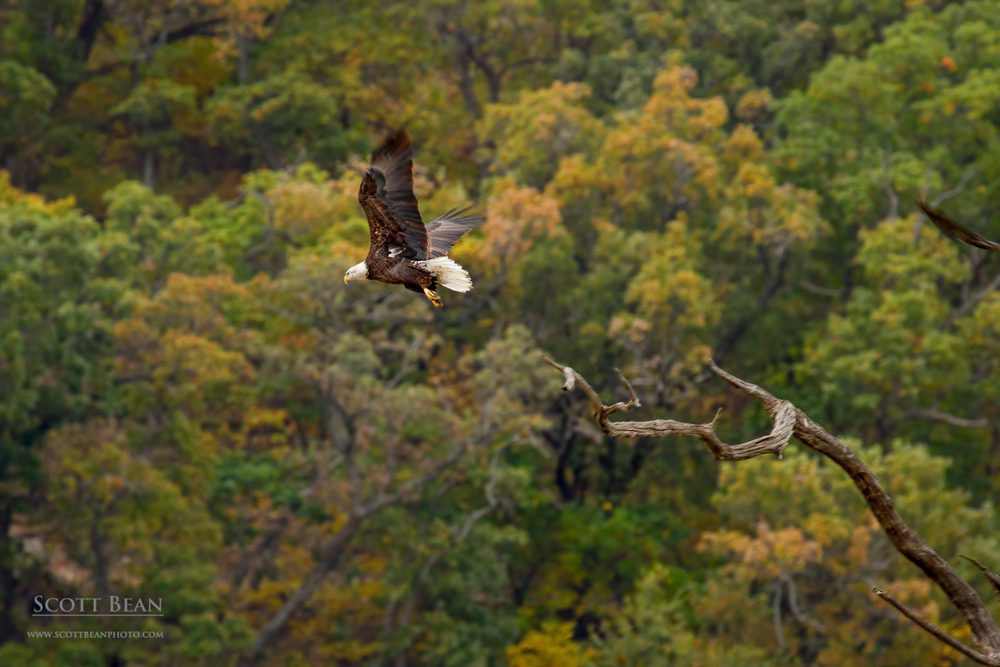 Not long after my first sighting of the juvenile bald eagle at the tubes, I came across a pair while out at Stockdale Cove on Tuttle Creek Lake. I was out on October 17th checking on the Fall color when I spotted an adult and juvenile bald eagle on one of the dead trees out in the cove. The eagles were not very close, but it was great to see the eagles unexpectedly. 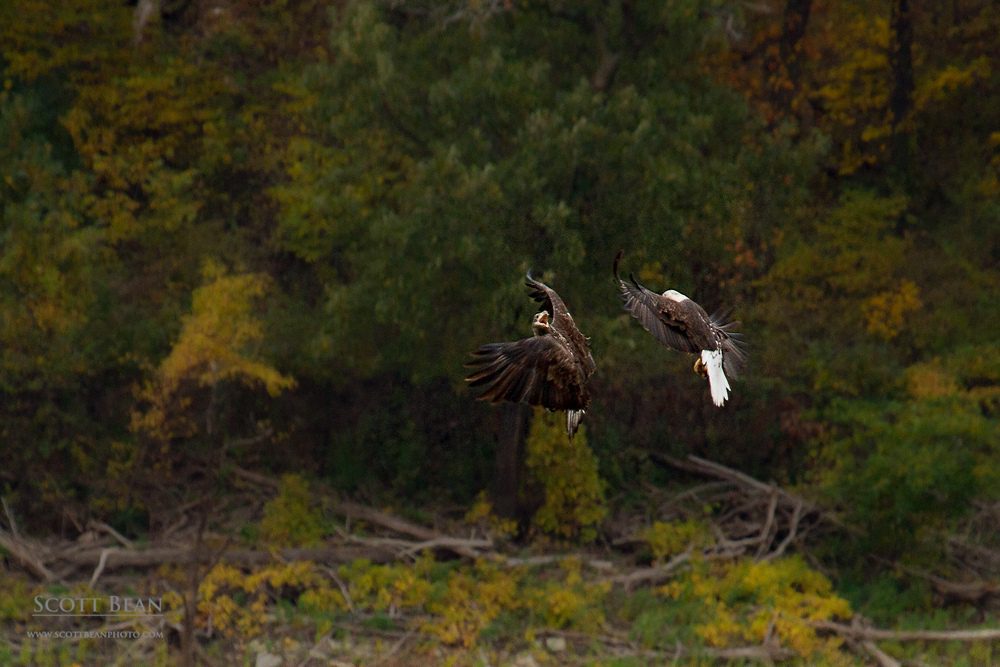 As I was watching this pair, the juvenile eagle was continuingly moving closer and closer to the adult. The adult would move away, and the juvenile would again move closer. After a few minutes of this, the adult charged the juvenile and chased it away. I have no way of knowing for sure, but I wonder if this was an adult that had nested in Kansas and the juvenile was one of its offspring that it was chasing out of the nest so to speak. This would seem to make sense especially since it was so early in the year for the eagles to be in the area. 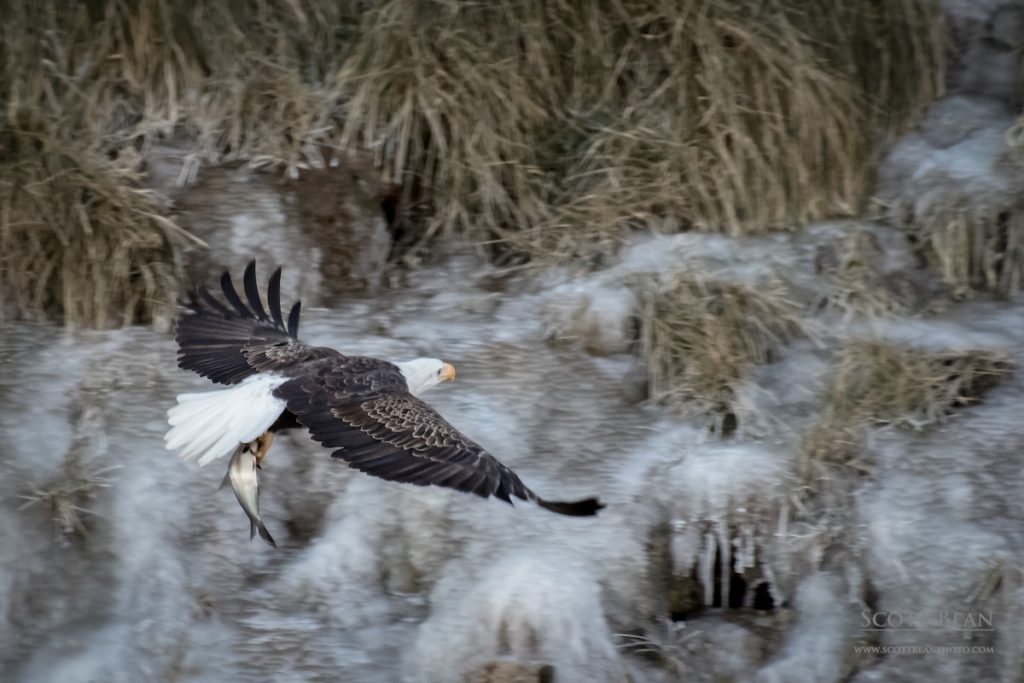 Catch of the Day

Later in the Winter I was able to head over to Milford Lake on a few weekends to look for the eagles there. One of my first trips to Milford with Eldon Clark resulted in my only photos of an eagle pulling a fish out of the water. We were fortunate to see eagles fishing a couple of times. The photo above was made below the dam at the outlet area of Milford. After catching this fish, the eagle flew up into a tree not far from us and proceeded to eat the fish. Very interesting to watch that. 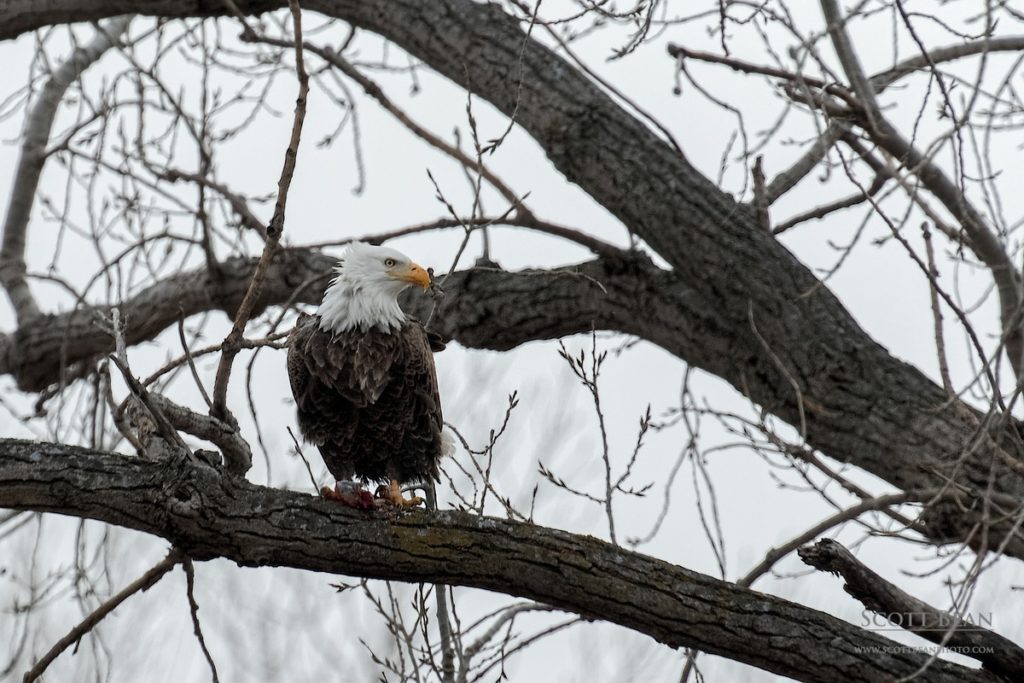 On a later return trip to Milford Lake I photographed another eagle enjoying its recent catch. Personally not my choice of food, but if you are an eagle it was probably a good brunch. 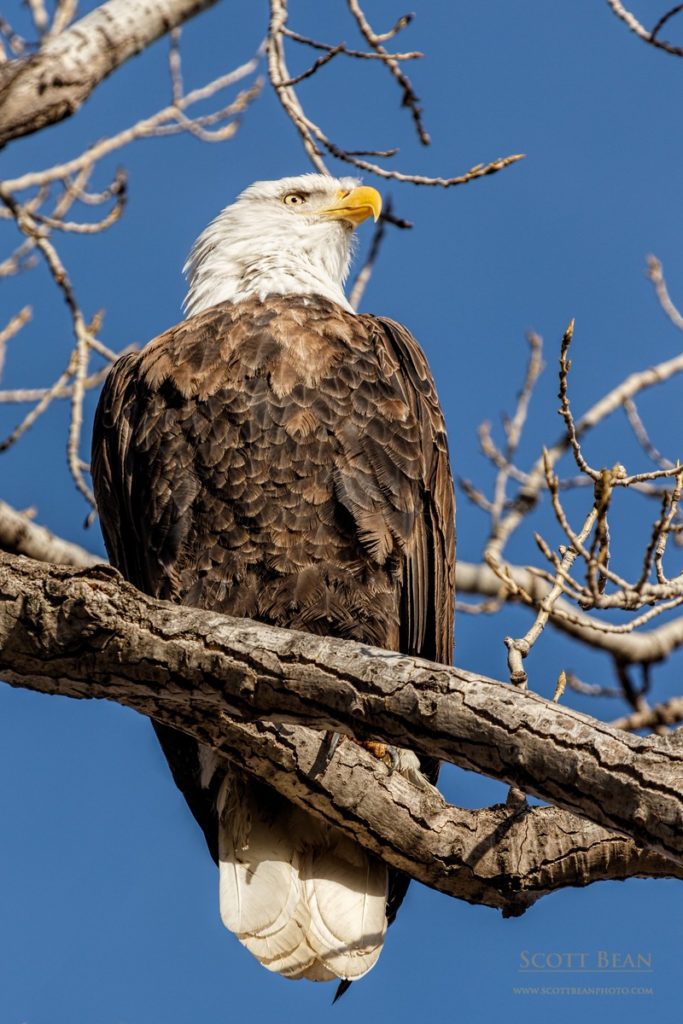 My last couple of trips over to Milford to look for eagles were in February and I was able to photograph this eagle on a beautiful sunny morning. The blue sky in the background really shows off the colors of the eagle. 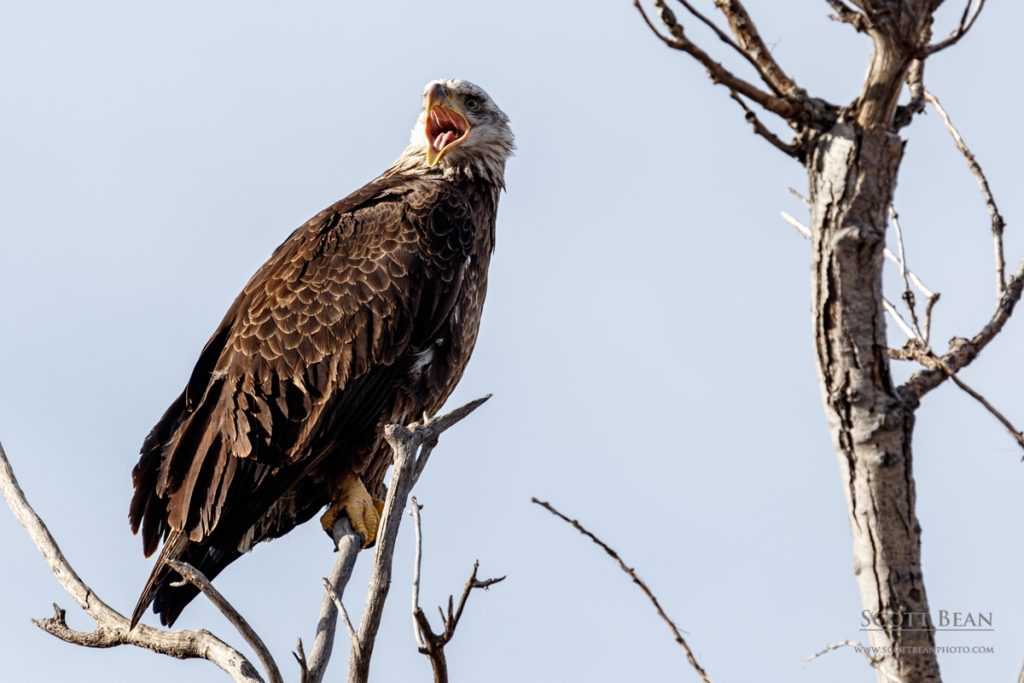 This year I also got to hear the eagles vocalize a lot. On this particular morning there were several eagles in the area and they were really talking a lot. I probably have heard the eagles before, but wasn’t really certain what I was hearing. Once I knew what they sounded like, it was fascinating to hear how vocal they were.

This was a fun winter spending time with the bald eagles. I got to go out with friends several times and my Dad and I were even able to get out together once on an eagle photography outing. I’ve had Spring fever really badly the last few weeks and I’m really looking forward to the turn of the cycles and the return of color to the world around me. I will be very happy though next Winter when the eagles return again.

Thanks for stopping by and if you would like to see more of my wildlife photography, please visit my Wildlife Photography Gallery.

As always, if you would like to join my email list and be notified of new blog posts, show announcements, print sales, etc. you can sign up here.

Category: From the FieldBy ScottMarch 22, 2016
Go to Top
We use cookies to ensure that we give you the best experience on our website. If you continue to use this site we will assume that you are happy with it.AcceptPrivacy Policy