The scene that created an obsession 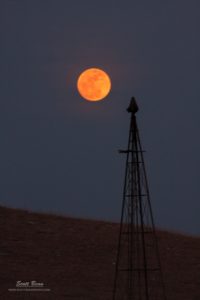 When I first started doing nature photography I used to go out on Marlatt Ave looking for photos. It is still one of my favorite places to go out and shoot (although the area is sadly starting to be “developed”). One evening, probably 12 years ago or so, I was just sitting in my vehicle listening to some quail and coyotes after a evening of shooting. I was facing east where an old windmill sat in a pasture along the road. As I was sitting there I noticed a strange glow on the horizon, I had no idea what it could be. Then, right beside the windmill the moon appeared and slowly rose into the sky. It was amazing. I grabbed my camera and started shooting like crazy. Unfortunately I didn’t really know what I was doing back then and none of my photos came out (all were over exposed despite bracketing). Seeing the moon rise like that was something I’ll never forget. And I was hooked on the idea of photographing the moon rising. Now each month I try to make it a point to go out around the time of the full moon and get some moon shots. Over the years, I went back to that exact spot on Marlatt Ave to try and get the moon rising by that windmill. I even had a friend that did some calculations for me to predict when the moon would rise in that area. I was never able to line the moon up by that windmill again. But on this past April 19th I was driving back into town on Marlatt Ave and finally saw the moon rising beside the windmill, almost in the exact spot I had seen all those years ago. Sadly the top of the windmill was removed a few years ago so the scene wasn’t what I was hoping for. But I did get my shot in the end.

You can see more of my moon shots in my galleries here.

Category: From the FieldBy ScottApril 26, 2008
Tags: kansasmanhattanMarlatt Parkmoonwindmill
Go to Top
We use cookies to ensure that we give you the best experience on our website. If you continue to use this site we will assume that you are happy with it.AcceptPrivacy Policy