Strange Photography Opportunities for the First of Spring

It seems like winter really didn’t want to leave this year with several late snow storms coming through the area. I know I’ve complained about the snowy weather (who hasn’t) which was a largely wasted effort on my part. The weather will be what it will be (this summer I’ll be complaining about the heat and wanting winter back!) and the snow storms and the cold did present me with some nice photo ops at the Pottawatomie County fishing lake near Manhattan, at the River Ponds below the dam at Tuttle Creek Lake and some nice images along the shore of Tuttle Creek Lake However, I have been eagerly waiting for spring to arrive and bring some color back into the landscape. With spring officially here now and a few days of warm weather, the green must be on the way right? Well apparently winter didn’t want to go out with a whimper and on Sunday and Monday of this week decided to dump some more snow on us. On the positive side, this did create another chance for me to photograph the birds that came into our feeders in the front yard. I wouldn’t have guessed I would be photographing birds in the snow in late March, but what the heck, a photo op is a photo op! I really enjoyed photographing the birds during the late snow storms so I guess this was a bonus? 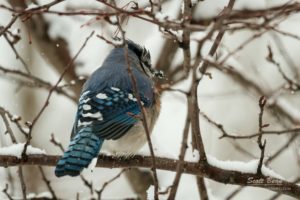 I’m not sure if the Blue Jay in the photo above thought the snow was a bonus (and I think a lot of people in the area would agree) but at least this snow came without the bitter cold of the winter storms. 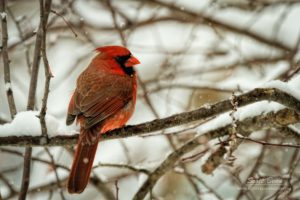 We had several male Northern Cardinals in the tree and of course the Cardinals got most of my attention. They just look so fantastic in a snow storm (actually they always look pretty cool, but especially good in the snow). I couldn’t resist making a few photos of the Robins as well. I’ve always thought of Robins as a sign that Spring was here so I thought the Robins in the snow made for an interesting combination. 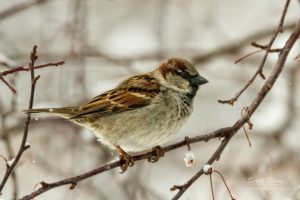 I also had to grab a few shots of some of the House Sparrows hanging around. I don’t know why but I really like sparrows of all sorts and especially like the House Sparrows. I know they get a bad rap for displacing native species and what not, but they are fun to watch and always make me smile.

The snow is almost all completely melted now and it turns out we could really use the moisture (most of Kansas is in a moderate to severe drought) so these light snows weren’t that bad. The chance to photograph some birds in the snow again was nice, but I won’t complain if we don’t see snow again until next winter.

Category: From the FieldBy ScottMarch 27, 2014
Go to Top
We use cookies to ensure that we give you the best experience on our website. If you continue to use this site we will assume that you are happy with it.AcceptPrivacy Policy