Stalking and photographing a couple of windmills

I’ve had an obsession with photographing the moon in the landscape for a long time, an obsession that started by watching the moon rise over a windmill just outside of Manhattan, Kansas. I didn’t get a photograph that first time I really watched (and took the time to really see) the moon rise over the horizon, but eventually I was back in that same spot when the moon rose again and I was able to finally make a photo from that location.

We just had a full moon last Wednesday on the 15th and the timing of moon rise and sunset looked optimal for me to try and photograph moon rise on the 14th.  Sunset was at 5:26 on the 14th with moon rise at 4:32. There are lots of places on the internet you can find times for moon rise/moon set and apps that will give you this information. I like to use The Photographer’s Ephemeris (TPE) which I’ve written about several times. TPE is a great tool for landscape and nature photography and I use it quite a bit when I’m planning trips out with my camera for any type of photography, but I use it most often when scouting for locations to photograph the moon in the landscape. TPE also provides a good reminder of useful days for photographing the moon in the landscape, any date with an asterisk (*) by it is a day when the moon will be low on the horizon near sunrise or sunset.

Back to the 14th, with the forecast calling for clear skies there wouldn’t be any problems photographing the moon. On some previous trips north of Manhattan I had located a windmill that I thought might line up with a moon rise some time and periodically checked this location near a full moon.

Bingo. The moon was going be rising perfectly for a chance to photograph it alongside the windmill.   The light blue line in the photograph above represents the path where the moon will appear if you were standing where the red “baloon” is in the lower left corner of the photo. The windmill is circled in red. Not only was the moon going to rise near the windmill, but with the road south of the windmill, I would be able to adjust my shooting position to put the moon in several different locations around the windmill. 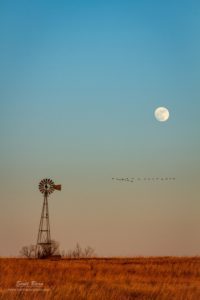 Of course, TPE can only tell you part of the story when setting up a shot. I didn’t remember, for example, if there were trees along the road that might block my view of the moon and the windmill, if the road cut through any hills that might block my view, etc. Everything worked out great though, and I had an unobstructed view of the moon and the windmill. My favorite photograph of the evening is the one above. As I was setting up the scene above a flock of geese flew into the frame adding a great element to the photograph.

This windmill was located in a position where I thought I might also have a chance to photograph it with the setting moon at sunrise. In this case I would be shooting the other direction (west). So, on the 18th I was back at this location. Things didn’t work out this time however, and I couldn’t find a composition including both the moon and *this* windmill I liked. All was not lost though, as just south of this first windmill was a second windmill positioned right alongside the road. 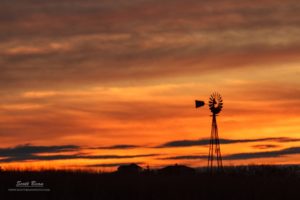 I ended up farther away from the windmill than I would have liked, but I was able to silhouette the windmill against the colors of the sunrise (so in this case I ended up shooting east again). 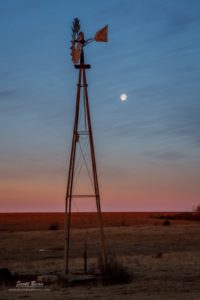 Early Morning with the Moon

The way this windmill was situated, I was also able to position myself east of it so I could shoot back to the west and compose some photographs of the moon setting alongside the windmill as the rising sun was lighting up the landscape. The beautiful colors in the early morning sky made a nice back drop for this image.

I’ve carried around the location of these windmills in my head for several years now hoping to someday photograph them with a moon rise or set. Funny how I could remember the location of these windmills but can’t seem to remember where I parked my car when I’m at the grocery store. I really should start creating a map of potential photography locations along with notes about the area and when might be a good time to be there with my camera. There are a number of apps that you can use for this purpose and I’ve just downloaded one to my phone. Not sure if I’ll use it, but I am going to start at least making a list of places that I’ve found that I revisit with my camera. Being familiar with an area does help in planning out a shoot. It is fun to just grab your camera and head out the door without any planning and just find what you find, but it is also fun to visualize a photograph and plan out a shoot and then go and try to create the photograph of your vision. I really like the idea of “crafting” a photograph starting with an idea of a scene and then going out and shooting it and ultimately making a print of the final photograph. If you haven’t ever sat down and planned out a shoot, give it a try and see if it changes how you approach photography.

Category: From the FieldBy ScottJanuary 22, 2014
Go to Top
We use cookies to ensure that we give you the best experience on our website. If you continue to use this site we will assume that you are happy with it.AcceptPrivacy Policy