Snow on the Mountain and Clouds over the Milky Way 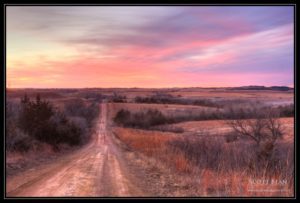 I was looking for the chance to go back to this area and do some more exploring and when I had the chance to be in the area last weekend I took it (and I got a chance to eat some of Mom’s fried chicken!).  With the drought we have been experiencing (along with most of the U.S.) I wasn’t sure what the conditions would be like so I was really happy to see several types of wildflowers blooming and one, snow on the mountain, seemed to be doing pretty well, all things considered.  Mother Nature can be pretty tough.

Roadside Snow on the Mountain 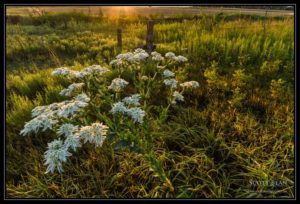 Snow on the Mountain

Dad and I ended a ways south and west of where the two photographs above were made. I’m not exactly sure where we stopped (one of these days I need to get a GPS to record my routes), but we found a nice patch of snow on the mountain right on the side of the road we could photograph. There was an interesting fence line in this spot as well as some sunflowers, lots of good subjects to explore.  We had some good clouds build up in the west which gave us some interesting skies to work with.

Sunset and Snow on the Mountain

I consider myself a landscape photographer, but one of the things I watch most closely when I’m out shooting is the sky.  It might be fun to be out exploring on a clear blue sky day (which is fine in its own right), but without clouds you aren’t likely to get those “wow” conditions that can lead to really dramatic photographs. Clouds provide visual interest in the sky and also produce some fantastic colors at sunset.  Just being out for drive with my Dad was fun and I would have been happy if photographic conditions fizzled, but I’m not going to lie and say I wasn’t really excited to see the clouds on horizon. 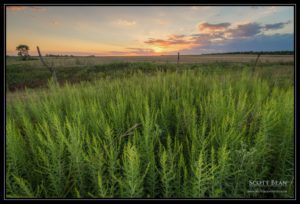 Dad and I both spent some time photographing the snow on the mountain and working our way along the road side photographing as the sun set behind the clouds.  Down the road from the snow on the mountain was some interesting vegetation that really made a nice subject in the late evening light. This was probably a scene I would have usually overlooked. Normally I would have stopped at this location made a few photographs of the snow on the mountain and then been on down the road looking for the next stop. Most of the time when I do that I regret it as I’m often driving (frantically) looking for something “better” to photograph when the light is really great and I just left a great location. Probably a lesson there about worrying over what “might be better” down the road vs. realizing what is good right in front of me. I think (hope) that may be this lesson is slowly starting to sink in. Sometime I need to go to a location and then have someone hide my car keys so I’m forced to spend more time ‘seeing’ what I’m given to photograph and not worrying about what I might be missing out on down the road a ways (note to the Universe, I’m not suggesting that you arrange for me to lose my keys along the side of the road to help make this happen!). 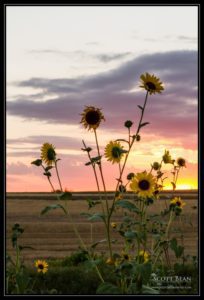 We finished the last of the sunset off photographing some sunflowers just down the road from the snow on the mountain.  The color right at the end of the sunset really exploded and made for a great backdrop for the sunflowers.

One of the reasons I was up at my parent’s house on this weekend was so Dad and I could meet up with some other photographers later that night for some Milky Way photography. Those same clouds that were great at sunset turned out not to be so great for the Milky Way.  After driving out to a nice dark sky location we had only a few minutes to photograph the Milky Way before the clouds moved in and completely covered it.  Regardless of the uncooperative clouds, it was a great to be out under the stars again and hanging out with some friends. The Milky Way will be back again and I’ll get another crack it.

Category: From the FieldBy ScottAugust 27, 2012
Go to Top
We use cookies to ensure that we give you the best experience on our website. If you continue to use this site we will assume that you are happy with it.AcceptPrivacy Policy