Sitting On The Dock Of The Bay (sort of) and photographing sunset.

Okay, so I wasn’t really sitting and I wasn’t really at a bay, but I did spend some time photographing sunset Sunday evening on a dock of sorts at Tuttle Creek Lake. Initially I had planned to photograph the moon rise at the River Ponds below the dam at Tuttle. I was out Saturday evening photographing the moon rise at the River Ponds below the dam but the timing wasn’t quite right – the moon rose a little earlier than I would have liked. It was pretty and I was happy to be out, but the moon was too high in the sky at sunset to be in the band of color along the horizon. I was happy to note though with all the geese in the area for the winter that the makings were right for a return trip on Sunday. Since the moon rises later each night, I had planned to return Sunday evening and try to make some photographs of flocks of geese flying in front of the rising moon.  As often happens with plans, things didn’t work out like I had in mind Sunday evening, but I’m not going to complain.  I was out Sunday morning watching the bald eagles (more on that later) and conditions were almost completely clear. However, by the time I was headed out the door with my gear Sunday evening the sky was almost completely clouded over, except for a partly cloudy band along the western horizon. The open area in the western sky had a lot of potential for a dramatic sunset and the clouds to the east meant no moon rise so I decided to scrap my plans for shooting moon rise and went to a cove on Tuttle near the marina that would be facing the sunset across the lake. 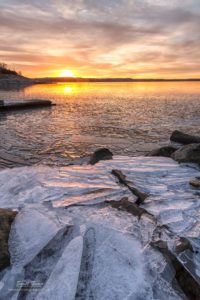 When I got to the marina cove, a bit of sunset color was just starting to show up to the west.  Some iced over rocks along the shore caught my attention and I made a few photos, the one above being the one I liked the most. I liked the texture of the ice and the feeling of cold that the ice added to the scene. 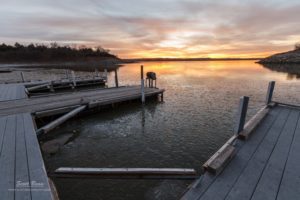 The colors of sunset were starting to intensify so I moved over to the dock near the boat ramp and composed a few shots of the docks and sunset. Not my normal subject, but I liked the lines the dock formed.

While I was photographing the docks, the ice sludge in the lake got my attention and I was curious how well it would photograph. I decided to walk to the end of the docks and try a scene with just the ice sludge in the foreground. I was pretty happy how this one turned out. Personally, I like wide-angle photographs that include a really strong foreground element and this type of scene was a good reminder for me that a strong foreground element doesn’t have to be a singular object.

As I was walking off the dock I noticed that the clouds to the east had broken up and the moon was visible. While the sunset colors were starting to intensify, there were some nice colors in the east as well (which often happens at sunset) so I decided to go back to the River Ponds and try to make some photographs of the moon and geese. Before I got near the River Ponds though this plan was again out the door as the clouds had moved back in and covered the moon and more important, the color in the west was now really intensifying. A quick change of location was needed so I decided to head to the east side of the River Ponds where I could photograph the sunset over the ice of frozen waters.  The sunset was now absolutely amazing…photographs will follow in a later post.

Category: From the FieldBy ScottDecember 16, 2013