Road Trip, part I: Down to Coldwater 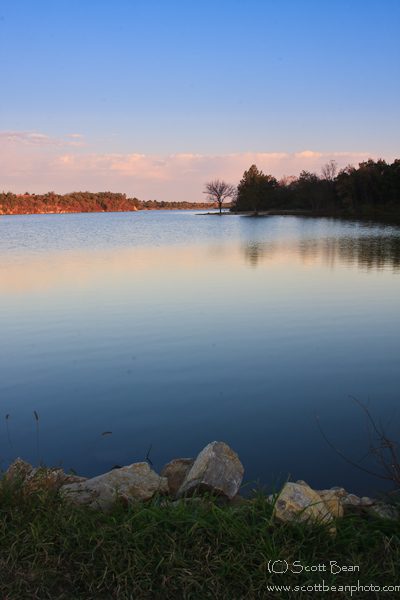 Earlier this month I had the great pleasure of taking a 3 day, 1100 mile photography road trip through south central and western Kansas with my Dad (who is also a photography addict).  We had a great time and it was great to get to spend time with my Dad driving through country we both love and taking pictures of it.

I’m going to do a few blog posts on this trip over the next week or so.  Dad and I drove through some parts of Kansas with some unique landscapes and I want to showcase these areas across several posts.  I’ve said it before (and will again I’m sure), but Kansas is not the flat, featureless giant wheat field that many people think it is.  I hope these photos will show that.

We started the trip off with by shooting sunrise at the Geary County Lake (see the photo above ).  We were thinking of hiking across the dam to check out the waterfall there, but decided against it and settled for driving around the lake and photographing the trees as the sun gradually lit them up. 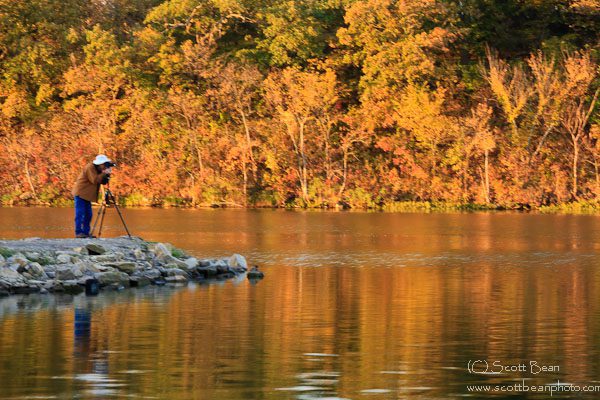 I snapped this photograph of my Dad as the far shoreline was really starting to glow.  The colors were really reflecting in the water as well.

After we were done shooting around the Geary County Lake, we headed down through central Kansas, stopping in Hutchinson to eat at the Dutch Kitchen (which has excellent food!).  After lunch was we drove through the sand hills in Stafford County, we stopped to photograph a few cottonwood trees.  Since it was right after lunch, the light was very harsh so I opted to use my infrared camera. 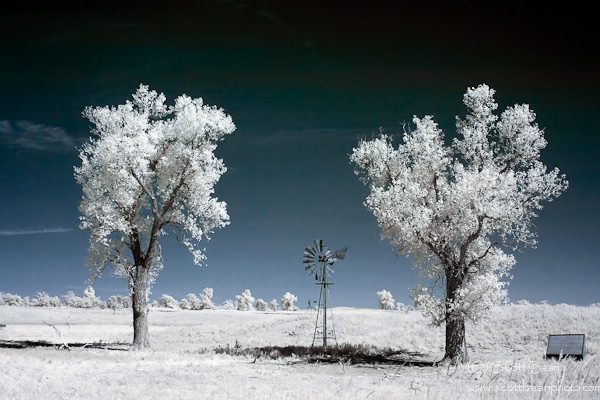 With the direct sunlight shining on the cottonwood trees (which were still green), they really stood out when recorded in infrared.  The sand hills region in this part of Kansas are really beautiful and I hope to be back when I can spend some time there in better light.

After stopping in Stafford County, we took a swing through the Quivira National Wildlife Refuge (QNWR). This refuge is about 7,000 acres and is a major stop over for migrating birds.  We arrived there a little after lunch, which meant the light was really harsh and in general not good for photography.  The wind was also really blowing so we decided to save an extensive drive through Quivira for another time (we have both photographed there several times before).  However, as we were leaving the refuge, a couple of cottonwood trees caught our eye. 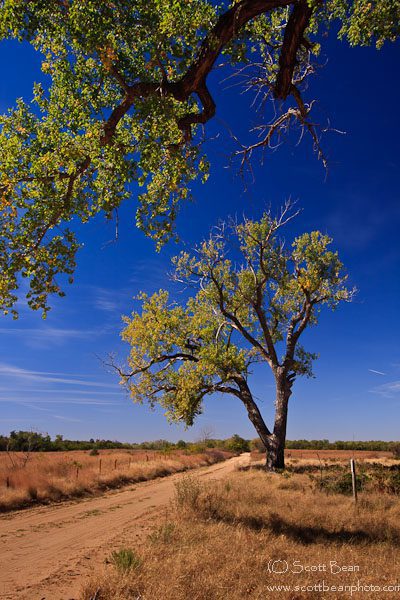 This photograph was made using a polarizing filter, which darkened the sky and cut glare coming off the trees, improving the light even though the picture was taking in harsh afternoon light. 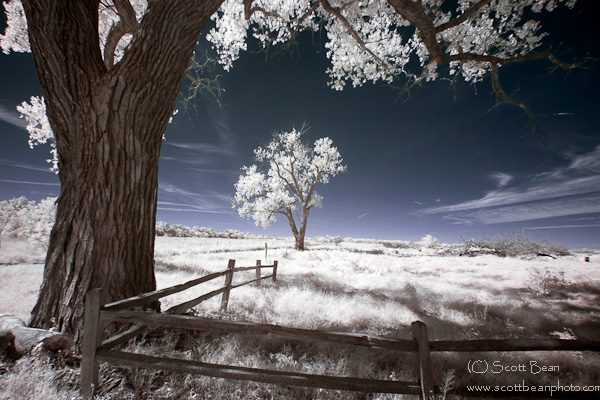 Cottonwoods and Fence in infrared

Again I dug out my infrared camera and take some pictures. I was glad that I did as the IR photograph above turned out to be my favorite from this stop…and maybe of the day.

Our next stop took us through Kinsley, Kansas (where I grew up) and we stopped south of town to photograph the sand hills there.  Again, this wasn’t the best light to be shooting in, but it was still great to see this area again…brought back a lot of memories.

I decided to take a panorama here to try and get a feeling for the openness of this area (this is almost a 180 degrees).  This is another unique part of the state I would like to spend some more time shooting in. 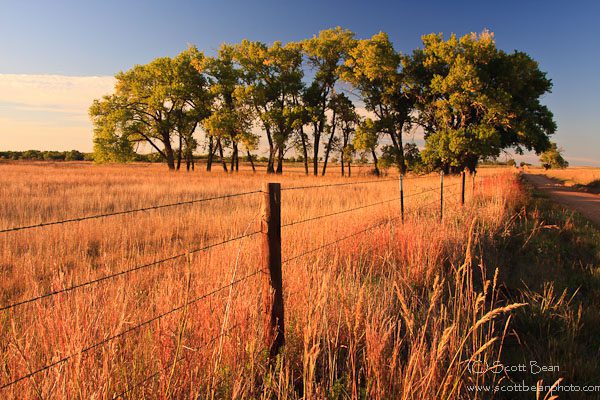 We finally made it to our destination for the day, Coldwater, Kansas.  After getting settled in, we headed out to catch the sunset.  The soft evening light really brought out the fall colors in the grass. The silence around us at this point was just incredible.  I can’t even begin to describe how peaceful it was. I can’t imagine living where I couldn’t get out into nature like this. 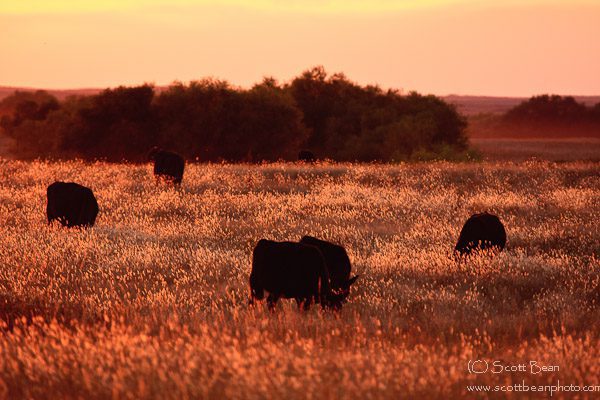 Shooting right into the sunset made for some dramatic lighting over the pastures. 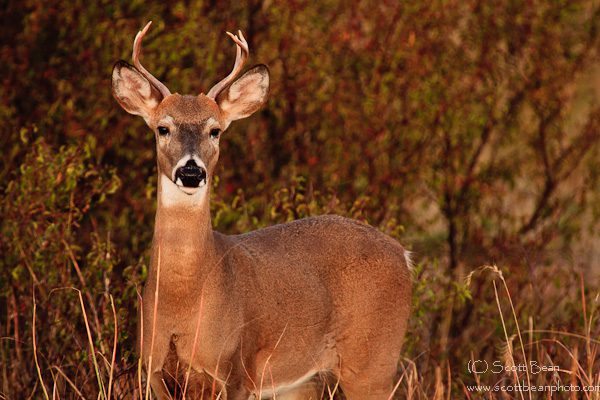 There was lots of wildlife in the area, the white tail deer were really thick, I thought this buck might climb in the vehicle with us! 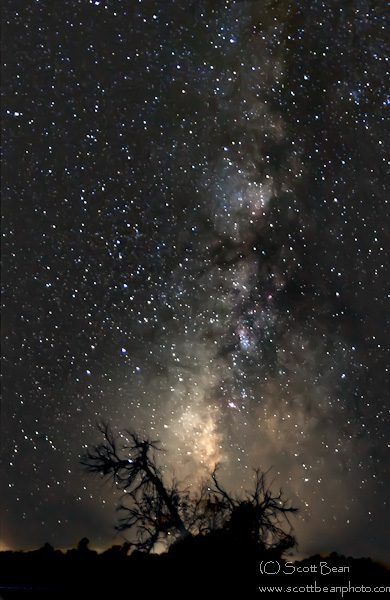 Later that night, we went out south of Coldwater, Kansas to photograph the Milkyway.   This was the primary reason for the timing of our road trip…it was the dark of the moon and we were heading into some areas of truly dark skies.  It was amazing how dark it was around Coldwater, we could see the milkyway from the edge of town!

All in all, it was a great first day of the road trip.