Photographing the Spring Burns in the Flint Hills

Each spring, large sections of the tall grass prairie in the Flint Hills of Kansas are burned off. If you don’t know what is happening this can seem like a strange (and maybe scary) process. The fires you see in the Flint Hills each spring aren’t “wildfires” though…these are intentional fires that are normally well managed and controlled.  If not for regular burning of the prairie, it is likely that the tall grass prairie we see today in the Flint Hills would not exist and that is has been fires that have kept the grasslands as they are for the last 5000 years. The burning of the tall grass prairie helps keep woody vegetation from taking over the grasslands, improves carbon sequestration by prairie grasses and can improve a number of factors related to the grasses and forbs found in the prairie. The annual ritual of burning portions of the prairie in the Flint Hills provides some unique photo opportunities as well. Each spring I try to get out with my camera as often as possible to photograph the fires.  Due to the recent droughts, there hasn’t been much burning over the last two years.  This year though,  I’ve been fortunate to photograph three burns so far. 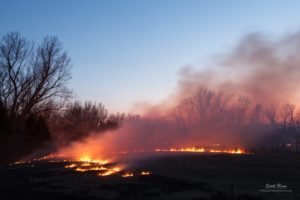 The first controlled burn I photographed was in northern Riley County. I came across the burn just as it was being lit and right at dusk, the time I like best for photographing the fires. 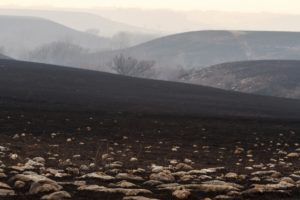 After the burn – Wabaunsee County

The second burn I was able to photograph was at the tail end of a trip through Wabaunsee County. I had been driving through the Flint Hills south of Alma with a friend and we seemed to be in the area too late as much of the area had already been burned. The photo above may look desolate and destructive, but it is amazing how fast this will turn a vibrant and lush green. 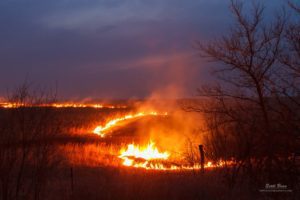 At the end of the evening, we did finally come across an active burn, again arriving just as the fire was being lit. 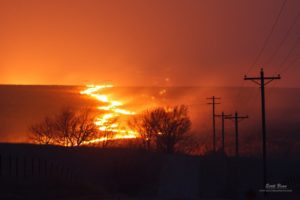 After photographing the start of the fire, we drove back up the road to a higher vantage point for a different perspective. 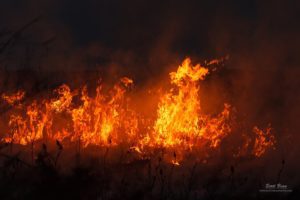 Beginning of the fire – Geary County

The most impressive burn I’ve had the luck to photograph this year was one in Geary County. Again, as luck would have it, we arrived just as the fire was being lit. The landowners were very gracious in allowing us onto private property to shoot some of the fire and also letting us know when to move down the road for a better vantage point. 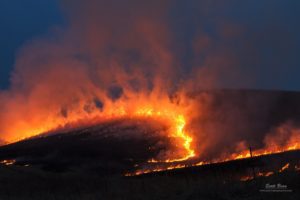 The fire lines were really beautiful as they moved across the hills. There is something almost mystical about the sound of fire in general and it was interesting to listen to the sounds of the fire change as the flames danced across the grass. 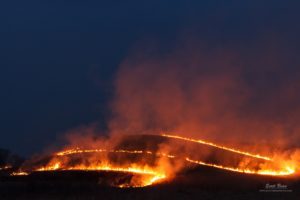 It will be fun to revisit this area in a few weeks to check on the progress of the new growth that will follow the burns. This whole process is fascinating to me as fire is almost always a destructive force, but in the case of the tall grass prairie it is a rejuvenating, and in some ways, a protective force. 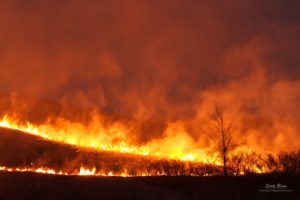 If you get the chance to photograph a burn, use common sense and stay safe. Don’t get in the way of the people managing the burn – if possible I try to talk to them before I start photographing and make sure they are ok with it and that I won’t be in their way.

Category: From the FieldBy ScottApril 8, 2014