Who needs the moon

The full moon today (Saturday the 20th) is supposed to be a ‘super full moon‘ where the full moons occurs when the moon is closest to the Earth (perigee).  The moon will be somewhere around 14% larger than normal.  I went out Friday evening to try and photograph the moon rise a day early.  Why a day early? For one thing the moon rise was at 6:44 and sunset was at 7:36, so the moon would be up while there was still enough light to photograph the landscape.  Tonight (Saturday) the moon rise is 8:01 and sunset is 7:37, which means it will be pretty dark by the time the moon is very high in the sky.  Good for photographing the moon by some silhouettes, but tricky for photographing the moon in a nice landscape. And more importantly, Friday night there was a chance of clear skies, Saturday’s forecast was for rain and clouds (which so far has been very accurate!).

Since it was a bit cloudy around 6:30 yesterday evening, I headed out to a location close to Manhattan (no sense in driving a long way to photograph the moon if it is cloudy!).  I ended up at the River Ponds below the Tuttle Creek Lake dam.  A check of The Photographers Ephemeris showed that the moon would rise nicely over the ‘River Ponds’ and I was hoping that I could get a photograph of the moon with some of the numerous gulls that are in the area.  At about 7:00 I gave up, there wasn’t any sign of the moon and the clouds were still fairly thick in the east.  However, to the west the clouds were breaking up and were making some interesting shapes and patterns. 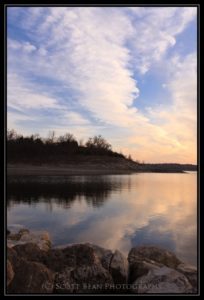 Maybe a chance for a good sunset.  So a short drive found me over at the marina on Tuttle Creek Lake.  The cover leading into the marina was sheltered and the water nice and calm, great for some reflections.  The photograph above was one of the first I made when I arrived near the marina.  This shows the cloud formations that had caught my eye while waiting on the moon.

As the sun slowly went down the sky darkened and the colors turned more from yellows to reds. I moved up and down the shore line looking for interesting foreground scenes to photograph with the beautiful sky. 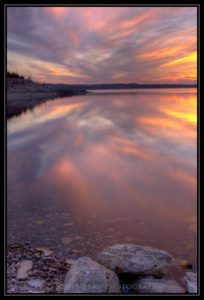 As the sun continued to disappear the colors in the sky intensified and I kept photographing. This photograph was about the peak of the show the sunset put on for me.  I think the sunset was trying to tell me “who needs the moon.”  As I was headed home from the lake I did see the moon, it had finally risen high enough to get up out of the clouds on the horizon. I thought about stopping to make some photographs of it, but it was pretty dark at this point and the moon was high in the sky and still in some light clouds which made it appear hazy.  I decided to let this one go, it will be back and on this night at least, the sunset was the keeper, not the moonrise.

Category: From the FieldBy ScottMarch 19, 2011
Tags: cloudskansasmoonperigeereflectionsSunsetTuttle Creek Lake
Go to Top
We use cookies to ensure that we give you the best experience on our website. If you continue to use this site we will assume that you are happy with it.AcceptPrivacy Policy