Each year there are certain things I try to make sure and photograph, waterfalls running full in the spring, burning of the prairie, the blooming of the butterfly milkweed, etc.  One thing I try not miss each year is the Kansas wheat fields right before harvest.  Kansas often gets stereotyped as one big flat field which is not quite the case; Kansas actually has a pretty diverse landscape. However, the state does have regions that are flat and you can find a lot of fields in the state, especially the flatter regions. And it is a good thing we have those regions of the state because Kansas fields feed a big hunk of the world (no food does NOT come from the grocery store, it comes from agriculture).  At specific times of the year, the crops in the field have their own beauty and one place to see that beauty is a mature wheat field just before harvest.  Before harvest, wheat fields take on a beautiful color and in the evening light will almost seem to glow (probably in sunrise light too though I don’t see many wheat fields at sunrise).  You would think that photographing a wheat field at its peak color would be an easy thing to do.  You find some fields you want to photograph. You wait for the crop to mature and once it “turns” and is a nice golden color you go out and photograph it. Easy. Except that almost every time I get to a field I want to photograph I arrive only to find I’m too late and it has already been harvested.  This year was a crazy year for the wheat, it matured much earlier than normal and harvest was a month early in some places so I was a little off guard mentally (who is ready to photograph a golden wheat field over Memorial Day?).  After realizing I was going to miss harvest (again), I decided to head over to some wheat fields I had photographed before around Riley, Kansas.  I wasn’t exactly sure of the location of the field I had in mind, but I did have a general idea, I knew if I got close I would recognize the roads and be able to find the field.  So off I went. 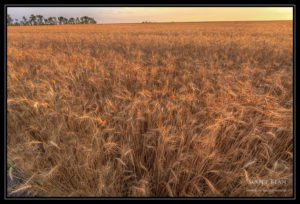 On the way to my ‘main’ location I did manage to find some fields that had not been cut. The sun was just getting to the point of ‘magic light’ and was really making the wheat fields glow. After photographing the first fields I stopped at, I started to drive toward where I thought the really good field would be. I lucked across someone cutting a field with the setting sun behind them and stopped for a couple of quick shots.

Then it was on again to find the main event. Eventually I recognized where I needed to be and was headed in the right direction. The sun was just setting and the colors in the sky were really starting to show up. I turned on to the road leading to the field I wanted and I arrived at my location…only to find that I was too late…again.  The field was being cut that evening; I could see the combine cutting the field on the horizon.

I missed it by that much. I did get some shots of the combine in front of the setting sun though.

And on the drive back home I came across the sunset reflected in a small roadside pond. Not a bad consolation prize at all.

A few days later I was out at Tuttle Creek to photograph sunset with a friend and ended up shooting sunset over a recently cut wheat field that had been baled.  We had thought the sunset was going to be a complete bust due to the cloud cover, but at the last moments the clouds broke enough that we were treated to a beautiful sunset.

And the bales in the field made a nice subject, probably better than the uncut wheat field would have made. Maybe in this case being late to the field was a good thing.