“Just” another sunrise at Stockdale

Can you believe it? I actually got myself out of bed this morning at 5:00 am for some sunrise photography at Stockdale Park on Tuttle Creek Lake.  Actually the alarm started going off at 5:00, I think I actually got out of bed around 5:30, but that is still pretty good for me!  I was meeting some photographers from one of my photography classes and I was hoping for good conditions and mother nature didn’t disappoint.

Lost in the clutter

I do a lot of photography at Stockdale Park, normally at the end of the cove farthest from the lake where several dead trees are just inside the water line when the water levels are low.  That was the location that I had in mind this morning, but the sunrise was too far to the north to shine down the length of the cove.  This meant we had to shoot at the lake end of the cove.  The first few photographs I made were of rocks well up on the shoreline as foreground elements with the pre-sunrise sky in the back.  These rocks had interesting textures to them, but as you can see in the photograph above, they didn’t stand out well from the other rocks on the shore.  To my eye, the large rock in the foreground was very noticeable mainly because I had my attention focused on it.  But when photographed it is lost in the clutter of the shoreline.  Cameras can’t focus their “attention” like we can, they record everything in a scene with equal importance. 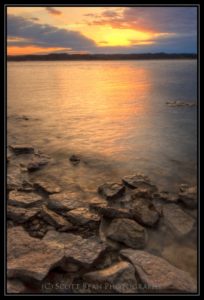 In order to make the rocks more interesting foreground subjects, I needed to move closer to the edge of the lake where I could isolate rocks out in the water.  By this time the sun had started to rise above the far horizon and the light was getting much better.  The sky was considerably brighter than the foreground and my camera was not capable of recording this range of light with one photograph, either I had to choose the sky like I could see it with the foreground dark or the foreground like I could see it but with the sky severely over exposed. The solution? Either using a split neutral density filter or taking multiple exposures and merging them into an HDR image. The photograph above is an HDR of 4 exposures.

I continued to move around the shoreline looking for interesting groupings of rocks to photograph as foreground elements in combination with the beautiful sunrise in the background.  The rocks in the photograph above made me think of stepping stones out into the lake.  Again due to the extreme contrast range in this scene an HDR photograph was needed in order for me to make the photograph I wanted. 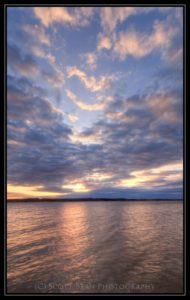 So why spend time searching along the shoreline for interesting rocks to use as foreground elements? Well mainly because I liked the rocks and I like wide angle photographs with really strong, interesting foreground objects.  Photographs composed this way have a strong sense of ‘depth’, which is important if your goal is to re-create a sense of the 3D world in a 2D photograph.  Compare the previous 2 photographs to the one above of just the lake with no obvious foreground subject.  There isn’t anything ‘wrong’ with the photograph “Just the Lake” but it does lack a sense of depth, it is ‘flat’.  Personally I don’t find it nearly as interesting as the photographs with the rocks and the lake.  In situations like this with really beautiful dramatic light, I can usually be found intensely searching for an interesting foreground subject.  Without something strong in the foreground, this kind of landscape photograph just isn’t as interesting as it could be.

We finished off sunrise at Stockdale by moving back inland along the cove hoping to find some interesting clouds above the dead trees I mentioned earlier, but it wasn’t to be.  We were treated to a nice showing of crepuscular rays, sometimes called sunbeams, Jacob’s ladder, God rays, etc.  Not a bad way to end sunrise on the lake!

Every time I have managed to get myself up early for sunrise photography at Stockdale Park I have come away with some great photographs.  One of these days I just might manage to become a morning person if this keeps up!

Category: From the FieldBy ScottApril 23, 2011
Tags: HDRstockdale parksunriseTuttle Creek Lake
Go to Top
We use cookies to ensure that we give you the best experience on our website. If you continue to use this site we will assume that you are happy with it.AcceptPrivacy Policy