A good afternoon at the Bird Runner Wildlife Refuge

The Bird Runner Refuge is 220 acres located in the Flint Hills with some amazing views. When I left the house to drive out to the refuge, I had in mind several wide angle, large, all encompassing type landscape photographs of the recently burned (and quickly greening up) hills at the refuge.  Like with most plans, things turned out much different than I expected.  Wayne and I started hiking through a wooded area and then a creek bed and my attention was drawn to all the new growth starting on the trees in the area and the flowers that were blooming. I dusted off my seldom used macro lens and began shooting close up and more intimate landscape photographs, something I don’t do as often as I should.  The photograph above is an example of this. I was drawn to the shape of the tree trunk and by using a shallow depth of field (achieved by using a small f-stop number) I was able to make the tree trunk stand out from the others surrounding it.

It was good to see wildflowers starting to make their appearance such as this prairie phlox, its colors contrasted nicely with last years leaves that were surrounding it.  There were numerous clumps of these flowers growing in the wooded area where Wayne and I starting shooting.

I’m not sure what first caught my attention for this next photograph, but the plant growing next to the piece of wood reminded me of the sun peeking around a tree trunk.  You can make the sun have a ‘starburst’ effect by stopping your lens down (setting large f-stop numbers) and the shape of this plant reminded me of that. 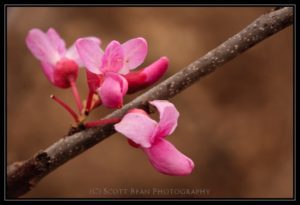 There were even a few redbud trees still holding on to the last of their blossoms.  Near where I made this photograph there was a small stream running and water was seeping into a small pool of the stream.  I wish I could have recorded the amazing sounds of the water, it was so peaceful. I think I could have plopped down on some nearby rocks and just sat there the rest of the day just enjoying the sounds of the water.

I think what caught my attention in this next photograph was the contrasting colors of the green new growth on the branch in front of the limestone rocks.  This was near the pool of water and the seep I mentioned above; I think I will be back to this place again and again over the coming year. 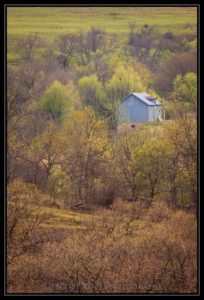 After leaving the wooded area and creek beds, we moved out into an open area and hilltops above a beautiful little lake. The first photograph in this post (the panorama) was made here.  I made several large landscape type photographs from this location, but none really did a good job capturing what I was ‘experiencing’, which is an important part of photography (at least for me). I don’t go out with my camera to simply ‘record’ a scene, I’m trying to record an experience for others to enjoy. And in this case, I largely failed on my hilltop photographs. But that is ok, that happens sometimes, and now I have an excuse to go back and try again!  I did however, like the above photograph which was completely on the other side of the refuge from where I was standing. I used a telephoto lens to ‘extract’ this section of the wider view. I was really drawn to how the building was nestled into the trees around it.

When I first hiked up to the hills above the lake the sun was behind some clouds and while the sky had some beautiful cloud patterns in it, the colors on the hills were a bit drab.  When the sun came out from the clouds again though, the hills literally glowed with green. It is hard to describe how this looks unless you have seen it. I think maybe that is why I was disappointed with my wide angle ‘large landscape’ photographs that I made on this day, none of them really captured that ‘glow’ on the prairie. This macro photograph though, does show this. You can see how the sun striking the new grass makes it appear as if it is glowing.  It is amazing, if you haven’t experienced this (or taken the time to stop and notice it!) I would recommend spending some time driving through the Flint Hills while the grass is just starting to make its reappearance in recently burned areas.

So I ended the day shooting with my macro lens, something I didn’t expect at all.  I guess the lesson I learned on this trip was to make sure I stay open to all possibilities…and don’t forget to look down once in awhile!