From the Field:First sunrise outing of 2014

Happy New Year! I hope everyone had a Merry Christmas and a good New Year celebration.  I have been looking forward to getting out and making my first images of 2014 and last Saturday I finally had the chance. Checking the weather forecast I had noticed that conditions around sunrise were supposed to be partly cloudy which meant a good chance for some dramatic color in the sky.

Weather looked good, now I just needed a location. Landscape photographers will sometimes talk about breaking a scene into three broad parts; the foreground, the middle ground and the back ground. The (hopefully) partly cloudy sky would serve as my background, so I needed to find a location with an interesting foreground and middle ground. I decided to shoot out over a lake where I could use the ice (and any open water) as the middle ground. That just left the foreground. The direction that light strikes your subject is also important in landscape photography and many times sidelight is the preferred light as this really shows off the shapes and textures of the landscape. I like to shoot right into the sun at sunrise/sunset though. Shooting directly into the sun can be challenging as the dynamic range of the scene can be extreme and you may have to deal with lens flare, but shooting towards the sun can also produce some really dramatic images (always remember to protect your eyes!).  So I had my background (hopefully), I had an idea for middle ground – I knew I wanted to shoot over a lake and I wanted to shoot towards the sun. Now I just needed a location where I could look for an interesting foreground.

I hadn’t visited the Pottawatomie County lake near Manhattan in awhile and I knew that the rocks along the shoreline might have some potential for my foreground. A quick check using the Photographer’s Ephemeris . showed me that the sun would rise over the lake perfectly if I was on one of the fishing piers on the northwest corner of the lake. Perfect.

Now I had my location all I had to do was get out of bed and in position for the sunrise. Probably shocking to those that know me, I was up and out the door with time to spare Saturday morning. When I arrived at the lake, color was just starting to form to the east,  and one of the first things that got my attention was textures in the snow near the shoreline. I decided to try making a photo that emphasized these textures in the foreground. I selected a low shooting position and wide-angle lens to help bring out the textures and composed my first few photos with the color of sunrise in the background. 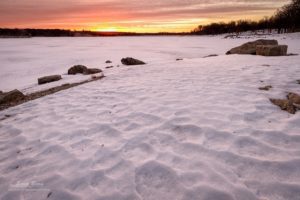 As the sun was just coming up, dynamic range of this scene wasn’t too bad, but I made a series of bracketed exposures and the final image above is composite of two different exposures; one for the foreground and a darker one for the sky to retain the details in the clouds around the sun. 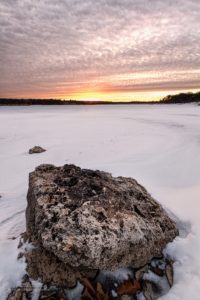 When I first thought of coming out to this location the photograph I had in my mind was one of the rocks along the shoreline. After my initial shots of the textured snow, I moved out closer to the edge of the lake and started looking for interesting rocks. I found the one in the photo above and was drawn to the textures on the surface. Again using a low shooting position and a wide-angle lens I made the above photo with the sunrise in the background. I also liked the way the tracks in the ice and the curved line in the ice led through the lake (middle ground) and pointed towards the sunrise.

After spending some time in my initial location I started working my way north along the shoreline. It was around this time that I noticed I had company; a fox had come out of the woods to the north and was moving across the frozen lake. I considered trying to get my telephoto lens on and shooting a few frames of the fox, but decided that the fox would be long gone before I could switch lenses so I just decided to watch the fox make its way across the lake. Not bad company for my first sunrise outing of 2014. 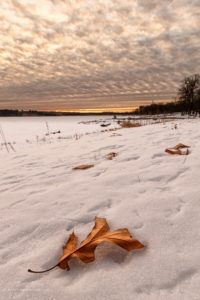 My last photographs of the morning were of some leaves that were lying on top of the snow near the shore. Some were partially covered with snow and ice, some just on the surface of the snow. I searched around to find a leaf that I thought was big enough to show up well in a photograph.

The color had mostly left the sky by this time, but the clouds had some very interesting patterns to them and the light in the sky was still very interesting so I continued to shoot along the shoreline for a bit longer. All things said, a pretty good way to kick off 2014 photographically. I’m looking forward to seeing what the rest of the year will bring.

Category: From the FieldBy ScottJanuary 8, 2014