Easter sunrise and the sounds of the lake I decided that I would go out Easter morning for sunrise with my camera and see what there was to see. Easter sunrise services are important for a lot of people and I thought it might be interesting to make a photograph of the sunrise that so many people might be seeing.

I had decided that I would go out to a small cove on Tuttle Creek Lake not far from the dam. I’ve visited this location before for sunrise on great mornings as well as not so great mornings and in the evening for moonrise. I had checked the weather forecast and it called for partly cloudy skies which would mean a chance for some great colors…since this was a special morning I was hoping for a special sunrise.

The sunrise did not disappoint. I could see color forming in the sky well before sun came up and the color just before the sun appeared was fantastic. The clouds were great and provided a lot of interesting details and textures in the sky. Visually, this was a stunningly beautiful morning. What first caught my attention though when I stepped out of my vehicle was not the color of the sky or the interesting clouds, but the sound of the lake…the waves coming ashore were really creating a peaceful, relaxing sound. I know I’ve mentioned before that I love the sound of water and have made attempts to try and incorporate the idea of the “sounds” of waves in my photographs before. Obviously photography is a visual medium, but we experience the world around us through all of our senses, not just our eyes. This influences how we photograph our world and I wanted to make a photograph that would provide viewers the possibility of at least imagining the sounds of the waves. These sounds were more important to my experience of sunrise than the visual aspect. To do achieve this, I decided to use a faster shutter speed so that the waves would be visible on the water. The dead trees and the colors of sunrise reflected on the water provided a nice setting for the waves, but the waves were what I was really interested in. 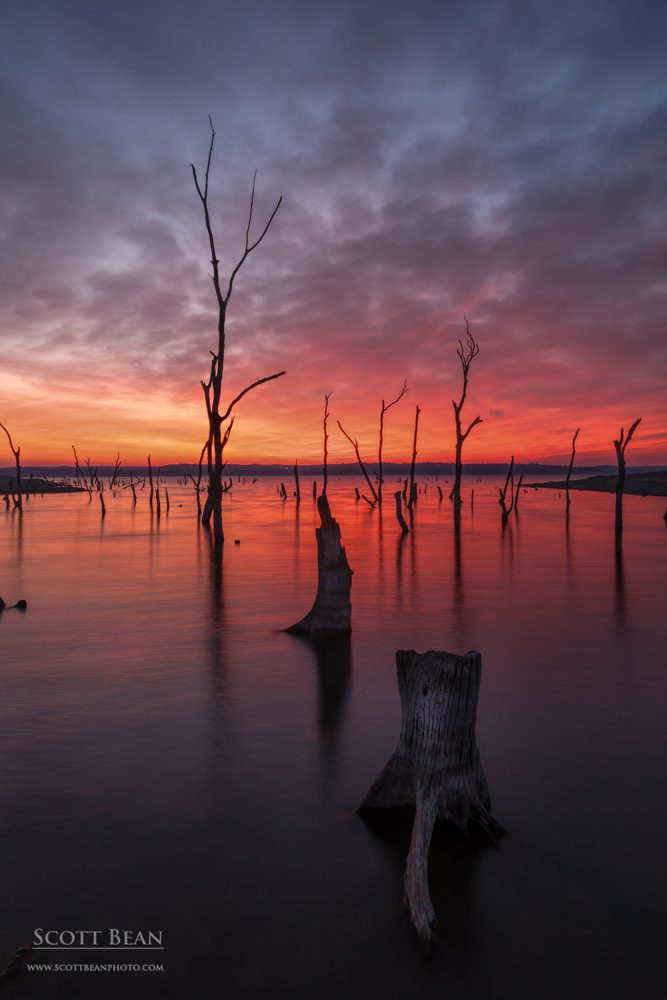 The alternative would have been to set my camera to achieve a slower shutter speed. The slower shutter speed causes the waves to blur as they move and the surface of the water becomes smooth. I think this is visually appealing and I like the result, but it does not reflect my personal experience of the morning. Photography is about light and of course will always emphasize the visual aspects of our experience, but it also too easy to get wrapped up in “this is what the scene looks like” and not focus on “this is what I experienced.” What we see is of course going to be very important for any photograph, I’m not trying to say that our visual experience isn’t important, but at the same time we are more than just our eyes. And what we “see” is influenced by more than just the light striking our optical nerves, it is about how we perceive that visual information and what we think about it. Likewise, our other senses are also going to be influencing us while making photographs. 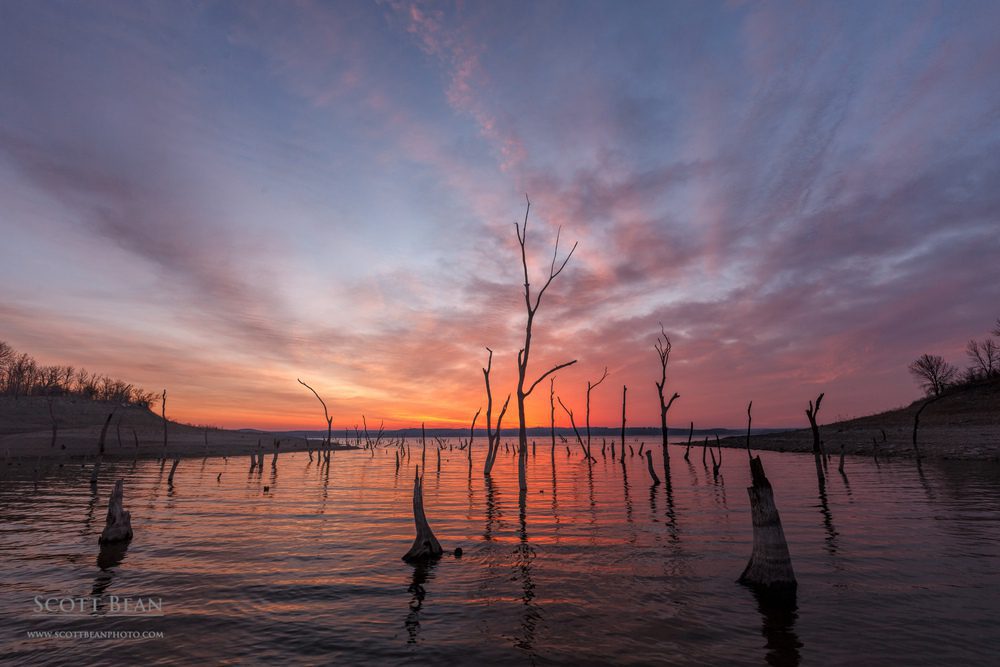 The cove I was photographing in is small, but well protected and I was drawn to move out of the cove out to the main shoreline of the lake where the waves were a bit a larger, but more interesting, louder. I worked my way around the cove to the shoreline and then just sat down for awhile and listened to the sounds of the lake. It was a very relaxing and soothing morning. After sitting for awhile, I decided I wanted to try and create another photograph of this part of my morning. I lay down on the shoreline with a wide angle lens and begun shooting some photographs of the waves coming ashore with the lake and the sky in the background. I have done this a couple of times before and in those cases, really liked the effect, but on this morning it just wasn’t what I wanted to create. I was trying to “force” a photograph and while I created some photos that I think were visually interesting, again they didn’t really convey what I wanted to convey. 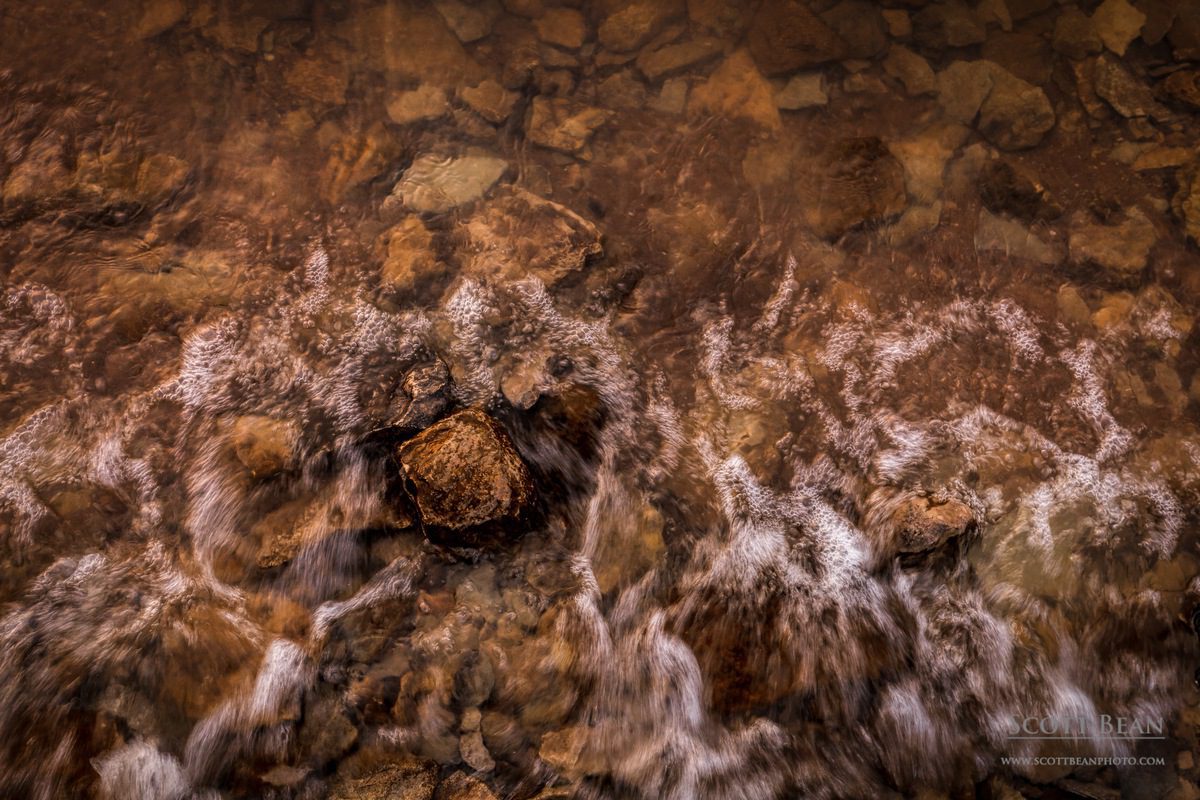 I decided to stop and call it a morning. As I was getting up off the shoreline (a process that took longer than it should, who said getting older was fun?), I happened to look (i.e. notice) the water as the waves broke on the shoreline. This to me was really where the sounds were at that I was enjoying. I pointed my camera straight down and begin photographing as the waves would break and the water would flow over the rocks along the shore. The photograph above represents to me my experience of just sitting on the shoreline after leaving the cove.

It is very easy to be distracted from the present moment and what we are experiencing in today’s world. I’m always trying to be more mindful of what I’m experiencing in the ‘now’ rather than living in the past or worrying about the future. More often than I would like I lose my connection with the present moment. I’m glad that the sounds of the lake grabbed me when I arrived for this sunrise and helped to keep me anchored in the present.

If you need a moment away from the worries of the past and future, take a wander through my waterscapes and see what experiences the images evoke for you:

The Energy of Water

The Stillness of Water

Category: From the FieldBy ScottApril 6, 2015