Dancing on the Prairie – Watching the Greater Prairie Chickens Boom

This past weekend I had the opportunity to visit a greater prairie chicken booming ground on Konza Prairie. A booming ground is an area where male prairie chickens do a “dance” and also “boom” to attract the attention of females (a bit like a college bar district on any given weekend for humans).

The day started early, we had to be in the blind well before sunrise. I generally try to avoid being up “well before sunrise” but in this case it was worth it.  The behavior of the prairie chickens was fascinating to watch and the sounds the males made while “booming” and strutting their stuff was very interesting (click here for an example of what they sound like). 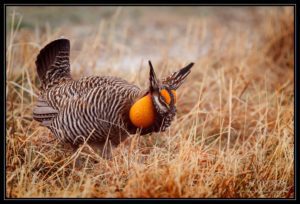 A couple of times raptors disrupted the prairie chickens, one by landing on nearby fence. Almost immediately the prairie chickens froze and a few literally disappeared by hunkering down in the grass. And just as fast, the action resumed when the raptor flew off.  We had some great views of the birds close to the blind, in fact one walked behind the blind a couple of times. It was a great photographic opportunity.

The males also fight with each other (see comment above about the college bar district) and would hop and fly at each other when somebody got to close to someone else’s territory.  This was fascinating to watch and made me glad I wasn’t a prairie chicken, it looked exhausting!

for the birds. If you get the chance, I would encourage you to watch the prairie chickens some spring while you have the chance. It is very much worth getting up before sunrise.

Technical details: We had changing light conditions to photograph in starting with low light right at sunrise, low contrast when some fog rolled in and then partly sunny as the fog burned off and the clouds parted a bit. I started off shooting at ISO 1600 and lowered as the light levels improved. I probably dropped my ISO a little too much early on though. “Booming” was shot at ISO 400, f/5.6, 1/160th at 400mm.

Category: From the FieldBy ScottApril 4, 2013
Go to Top
We use cookies to ensure that we give you the best experience on our website. If you continue to use this site we will assume that you are happy with it.AcceptPrivacy Policy