A Couple of Late Burns in the Flint Hills

The controlled burning of the tall grass prairie in the Flint Hills for this spring is over and the vibrant greens of the grasses and the varied colors of the wildflowers are making their appearance now on the hillsides. I always love it when the color seems to just explode back into the world after winter. As I mentioned in an earlier post, I had stumbled across a number of very photogenic burns this spring and for a while, every time I went out with my camera it seemed like I was photographing another burn. After the bulk of the burns were done and I was sure I wouldn’t be photographing anymore, I did come across 2 other burns. The first, on April 17th was just outside of Manhattan near the Washington Marlatt Memorial Park located just outside the northwest edge of the city. I used to do a lot of photography in and near the Marlatt Park area and still occasionally take drive down Marlatt Ave to see what I might find. I was very glad I did on this night as I had another chance (what I thought was my last of the season) to photograph a burn.

As with the other fires I had come across this spring, this one seemed to be especially photogenic. The fire was burning in long beautiful lines across the prairie and there were several lines burning at the same time. The long lines of the fires didn’t fit well in a single frame so I decided to shoot a panorama of the scene which worked out well. 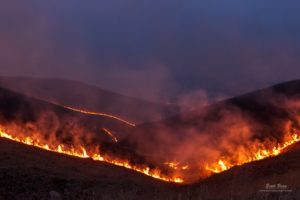 The timing also worked out nicely for me to photograph the fire burning down the draw shown in the photo above. This draw is one reason why I often drive down Marlatt Ave…I like to check the light and shadows on this draw. 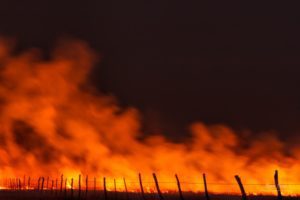 Burning Along The Fence – A Night Burn in the Flint Hills 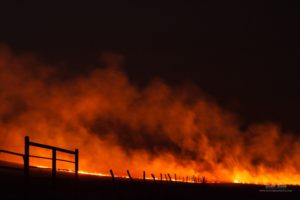 The glow of the fire reflected in the smoke also made some nice photo ops for me and provided enough light for me to create some silhouettes of the fire burning behind a fence line. Not a bad end to what I thought was my last evening photographing spring burns.

A few weeks later, on May 10th, I was headed back into town and needed a place to photograph sunset. I was almost back into Manhattan so I detoured out along Marlatt Ave on my way to a nearby windmill north of Manhattan. I noticed that a burn was just starting, which I thought was odd as late as it was in the season, but I ignored it and tried to make it out to the windmill to make a photo of the windmill silhouetted by the sunset. The sunset turned out to be a really nice one, but I was too late in getting to the windmill and too fixed on getting that photo to “see” any others. On my way back home I again took Marlatt Ave into town and now the burn that had just been getting started was really going. 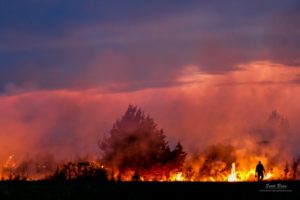 I stopped this time at the burn and had just started shooting the fire when one of the people managing the burn walked along the fire. His silhouette added a nice sense of scale to the scene and really made the above photo more visually interesting than it would have been without him in front of the fire.

I also noticed that the sun set right behind the fire. If I had not been so focused on getting to the windmill and stopped by the fire the first time I drove by it, I would have ended up with the chance to photograph the fire with a great sunset in the sky behind it. I don’t know how many times I’ve missed a great photo-op because I was trying to get to “something better” down the road. One of these days I’m going to learn the lesson that the light isn’t always better on down the road and just enjoy what I have where I am (or maybe not).

This controlled fire was just across the road from the fire featured in the photos at the beginning of this post. I thought it was interesting that both burns occurred after I was sure I was done with any fire photo ops and both were in the same area. The very first burn I photographed this year was actually at the Washington Marlatt Memorial Park so I guess I started and ended my spring fire photography along the same stretch of road. Being out in this area also led me to take one of my photography classes to Marlatt Park and some of my first wildflower photos of the season. Maybe I need to come out to Marlatt Park and Marlatt Ave more often.

Category: From the FieldBy ScottJune 3, 2014
Go to Top
We use cookies to ensure that we give you the best experience on our website. If you continue to use this site we will assume that you are happy with it.AcceptPrivacy Policy