A Cold Morning at Pillsbury Crossing and a Cold Sunset at Willow Lake.

Nice weather on Saturday and brutally cold on Sunday…ahh Kansas weather.  I had hoped the heavy snows before Christmas and the warm weather on Saturday would mean lots of snow melt which would have the waterfalls at Pillsbury Crossing running heavy. Then I had hoped the nasty cold weather that developed early Sunday morning would have frozen the falls at Pillsbury providing me with a wonderful photo opportunity Sunday morning. Alas it didn’t work out as I had it all planned out in my head. Despite the cold temperatures, I managed to get up and out the door Sunday morning but when I arrived at Pillsbury Crossing the scene wasn’t as I imagined. There wasn’t as much water flowing as I thought there might be and far less ice on the falls than I thought. Oh well, it was still good to get out even if it was oh sooooooo cold. 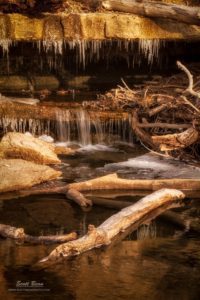 Since there wasn’t a lot of water flowing, I decided to use more short and long telephoto lenses to isolate parts of the falls. The sun had broken through the clouds as well and the falls were pretty bright which meant stopping my lens down as far as possible to slow the shutter speed down. A better option would have been to use my variable neutral density filter which would have let me reduce the shutter speed without the need to stop the lens all the way down and lose some sharpness due to diffraction.

With sunrise not working like I had hoped, I decided to try again at sunset. After making the rounds to a couple of different places I ended up at Willow Lake below the dam at Tuttle Creek Lake.

There were a few clouds hanging around in the west and sunset was trying to develop some color. The clouds were patchy though and letting quite a bit of sun through at this stage in the evening which was very bright reflecting off the ice. I decided to compose a photograph that showed some of the interesting patterns in the ice along the shoreline and that included just a bit of the sky and the sunset. Maybe not the most dramatic photo I’ve ever created but it captured the feeling of “cold” that I wanted and most important, I enjoyed the moment and the process – something I don’t always remember to do. Mission accomplished.

Category: From the FieldBy ScottDecember 30, 2013
Go to Top
We use cookies to ensure that we give you the best experience on our website. If you continue to use this site we will assume that you are happy with it.AcceptPrivacy Policy