Catching The Last Of The Sunset At The River Ponds

On Monday I made a post about photographing the beginning of what turned out to be an amazing sunset while out at Tuttle Creek Lake.  I had left the cove near the marina on Tuttle and was headed back to the River Ponds area below the dam at Tuttle to try and catch a shot of the moon rising, hopefully with some geese flying by. My plans changed though when I saw the color developing to the west as the sun was setting. Wow. The color was good when the sun was still in the sky, but just after it slipped below the horizon an intense red color started developing. I knew I wouldn’t have too much time before the color was gone so I went to a location where I knew I could shoot across the River Ponds toward sunset. This would put me in position to hopefully catch the colors of the sunset reflected on the ice of the frozen River Ponds. I had actually been to this location the previous evening for sunset so I had a good idea of what to expect. Being familiar with the landscapes and where to go at certain times of day to catch the light where you want it is one benefit of visiting in the same area frequently. 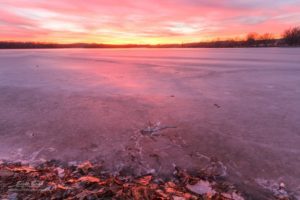 Cracks In The Surface

I knew there were some leaves frozen in the edge of the water so I utilized these in some of my compositions along with patterns and cracks in the ice. 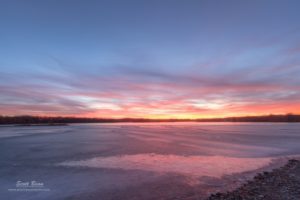 While wandering around the edge of the water, I noticed a patch of ice that was reflecting the light differently than the surrounding ice and made the above photograph. I was hoping the lighter ice would match well with the overall shape of the sunset. The results weren’t quite what I had hoped for, but that is one of the things that keeps photography so interesting to me; you never quite know for sure how a photograph is going to turn out until it is completely finished. 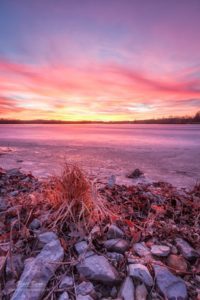 My favorite photograph from this sunset turned out to be the first photo I made when I arrived at the River Ponds. I noticed a clump of grass right along the shoreline that I thought was interesting. You probably can’t tell from the photo posted above, but the grass had some very interesting textures to it.  This clump of grass was not very large so I had to place my camera very close to. I used my widest angle lens to be able to include the grass, the reflections on the ice and the fantastic sunset. On a technical note, due to the range of light in this scene I couldn’t capture everything in one exposure so I shot a series of 4 exposures. I also set my camera to focus at the hyper focal distance to make sure I had as much of the scene sharp as possible and avoid stopping my lens down farther than I had to.

It’s Cold At The End

If you are curious, this is what sunset looked like in the same general vicinity the night before. This one was more subdued and didn’t have the incredible colors that the next days’ sunset would have but I really liked the way this photograph turned out. Probably even more than the photographs I ended up with the next day. Going back to what I wrote in Monday’s post about David duChemin’s book and the issue of confusing your subject matter with your subject…all these photographs have roughly the same subject matter, but to me they have very different subjects.  To me, the photograph “It’s Cold At The End” is more about silence, slowing down, a sense of peace, maybe a bit of sadness whereas the photograph “Nature’s Brilliance” is more about the sheer intensity of the color, energy, and awe. I’m interested how other people would view these 2 photographs and the differences between them and what they convey so if either strikes a particular chord with you please let me know.

Category: From the FieldBy ScottDecember 20, 2013
Go to Top
We use cookies to ensure that we give you the best experience on our website. If you continue to use this site we will assume that you are happy with it.AcceptPrivacy Policy