For a bit towards the last half of December I wasn’t sure I remembered what a nice sunny day looked like. It seemed like we were always under a dreary grey sky. I don’t know how people that live in perpetually cloudy locations can take it. A couple of weeks and I was climbing the walls.

My sanity aside, the dull grey skies were not doing much in terms of inspiring me to get out and make some landscape photographs, especially this time of year when the landscapes around me are becoming more monochrome as the winter takes its toll. Don’t get me wrong, the prairie grasses are pretty in the fall and winter, but they need some good light to show off their great late season colors.

So I was eager to take advantage of any bit of a break in the clouds and my first chance came on Christmas evening. My wife and I were driving home from my parents’ house and, as we were leaving, the clouds had started to break up. By the time we were almost to Manhattan the clouds had scattered and sunset was starting to put some beautiful color in the skies (and not grey!). 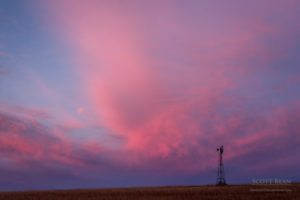 We took detour to a location where I knew there were a couple of windmills – only to find that one of them was gone. Luckily, one windmill was still standing. The photo above was made facing east, away from the sunset. At this point, the sunset was an amazingly brilliant red, but the clouds to the east were reflecting some of that color as a beautiful pink and the texture in the clouds was really interesting. The view to the east was too pretty to pass up. 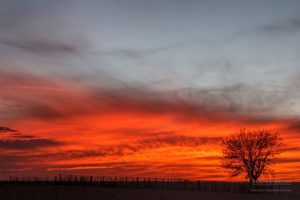 This next photo shows what the sunset looked like though, which was also incredibly beautiful. When I stopped to photograph the windmill with the beautiful eastern sky behind it, I was able to also make a few photographs of the tree and corral shown above with the fiery red sunset behind it to my west. Not a bad Christmas present to me at all! 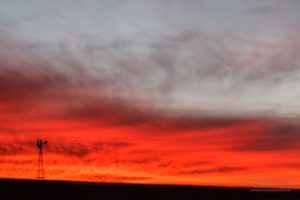 As we were leaving the area and heading back home though, the road took us back by the windmill which was now west of us, and I was able to also photograph it against the last of the colorful sunset. 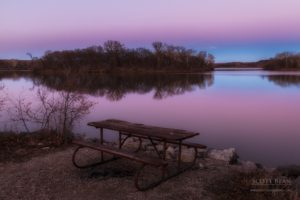 A Place Just to Sit

The next break in our grey ceiling came 2 days later on Dec 27th with almost completely clear skies. I had spent some time at the River Ponds on this evening looking for bald eagles (saw a few, nothing that I could photograph though) and stuck around for the after sunset glow of twilight. 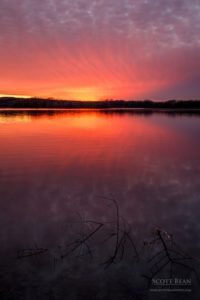 Our streak of less than solid cloud covered skies continued the next evening when I was again treated to an explosion of red at sunset. I had gone back out to the River Ponds, this time just for sunset (sorry eagles) and it was well worth the trip. One nice thing about photography in the winter, you normally have your locations to yourself. Yeah it was a bit cold, but not the really nasty terrible cold and it was peaceful. This is the sunset I finished out photography in 2014 with. Not a bad way to end the year. 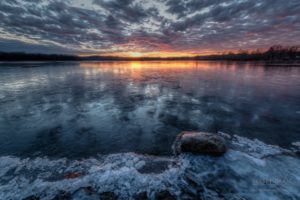 The End of the Beginning

The next break in the clouds I was able to catch was on the evening of January 1st. I was again back at the River Ponds after spending some time at Carnahan Cove. We had some colder weather move since my last visit on Dec 28th and there was ice covering most of the water with some nice textures and structures along the shore line. This was a much colder evening on the 28th, but again a peaceful evening (it would have been even more peaceful if I had been smarter and dressed warmer!). This was my first outing of 2015 with my camera and I can’t complain at all about it. I’m looking forward to seeing what else 2015 brings me to photograph!

View more of landscape photographs featuring the sun at my online gallery: The Sun

Category: From the FieldBy ScottJanuary 6, 2015