The End of the Beginning

To start the year off photographically I went out with a friend to explore some new areas in Wabaunsee County. We found some nice areas on the western side of the county that I will definitely be back to explore again during the year. 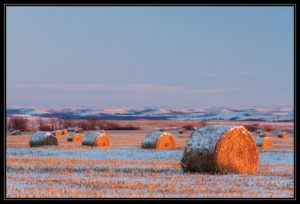 After stopping a few times to photograph some old buildings we came across a field of round bales about the time the sun was setting. The field was situated just right to catch the low evening light and the Flint Hills behind the field made for a nice back drop. 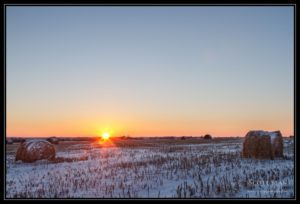 As the sun went down I moved farther east along the field so I could shoot back toward the setting sun. Side light can really bring out some great details and texture in landscape photographs, but I enjoy shooting straight into the sun, I like to capture the landscape with the last bit of sunlight shining across it. By the time I had the photo above I was pretty cold all the way through, the temps drop fast when the sun goes down!

In addition to the single frames of the field I was shooting, I also decided to shoot a panorama of the field.  I liked the field of view that the pano captured and I was happy with how this one turned out.

I was a bit disappointed with myself that I didn’t get the combo of sunsets and sunrises that I had planned on, but not too much…all in all going out to take the first sunset of the year is not a bad way to start things off…even if it was bloody cold.

“End of the Beginning” – I used a wider angle lens for this shot, 24mm, to capture a few of the bales along with the setting sun. I shot a few different compositions of this scene but liked this one the best. This frame contained the most sky of the various shots I put more focus on the sun than the others where I included more foreground. Aperture Priority mode, +2EV, ISO 200, f/11, 1/15 sec

“Winter Bales” – This pano was made from 3 shots stitched together. I shoot my panos (usually) in Manual exposure mode so the exposure won’t change as I’m moving my camera across the scene (I also make sure autofocus is turned off). Each frame was shot at 47mm,  f/10, 1/13th, ISO 200. I had left my polarizing filter on my lens while shooting the frames for this pano which I normally try not to do. The degree of polarization you get with a polarizing filter changes as your angle to the sun changes so I had some pretty serious blue gradients running through the sky left to right in the finished pano. Fortunately for me, I didn’t like how the pano looked with a lot of sky in the scene, and when I cropped the sky down the blue gradients weren’t as noticeable. It is paying attention to small details like that that I need to get better at.

Category: From the FieldBy ScottJanuary 15, 2013
Go to Top
We use cookies to ensure that we give you the best experience on our website. If you continue to use this site we will assume that you are happy with it.AcceptPrivacy Policy