Out and back just in time for the sunset

Last weekend I was in Waterville with plans to try and photograph the Milkyway again with my Dad.  I had gone up early in the evening to have dinner with Mom and Dad (I never pass up a chance for a meal with my parents!).  By the time we finished eating (and watching part of a John Wayne movie), clouds were moving in and things didn’t look good for seeing any stars that night.  Clouds in the sky around sunset though are a good thing for ‘normal’ landscape photography.  So Dad and I grabbed our camera gear and headed out of town.  We left the house as the sunset was starting so we didn’t have much time.  Where to go? It would have to be someplace close to town…good thing we knew the area well.  We headed south of Waterville to Wildcat Road, a place we have photographed before and is only a few miles south of town.  Sometimes people think they need to be in a really exotic location or some place far from home to get good nature photographs.  Many of my best photographs have been made in places I have been several times before and that are relatively close to home.  Why?  I think it is because I know the locations well, I know what subjects I’m likely to find and I can anticipate how things will look in the current light. I don’t have to worry about trying to find an interesting subject.

Wildcat Road is one of those “minimally maintained” roads you don’t drive down if it has rained recently (lucky for us it hadn’t).  It also happens to have some great views of the Flint Hills and also some interesting trees right alongside the road which work great for subjects at sunset.  The road dips and turns in several places which allows you to work for different perspectives.  Many times there have been cattle nearby too if you are interested in portrait work.  What more could you ask for? 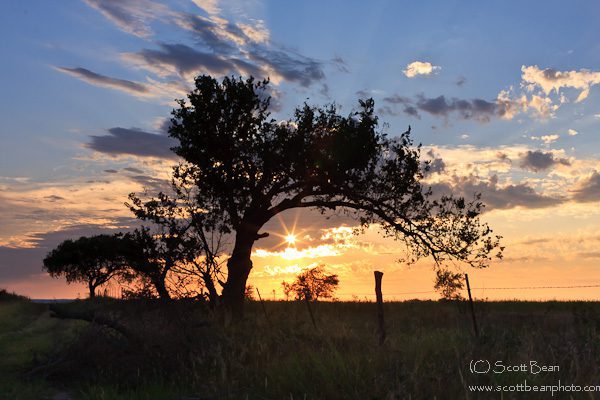 We arrived right as the sun was setting through a cloud bank and throwing off some beautiful color.  Light at sunset can change quickly and you never know for sure when all the color is just going to up and disappear.  The first thing I noticed was this tree so I made a few photographs of it basically silhouetted in front of the sunset.  As the sun moved down through the clouds it started to break through the opening of the cloud bank.  I stopped my lens down all the way to f22 to get the ‘star burst’ effect in the above shot.  In the photographs prior to this one the clouds were too heavy for the sun to shine through like this.  Almost immediately after this shot the sun broke all the way free from the clouds and was too bright to get a star burst like this.  I was bracketing exposures for some HDR shots as the sun was moving down which kept me in this location long enough to be in the right spot to record the star burst.  Turns out it was too windy to put any HDR’s together, but it worked out for me. (tech stuff for the above photograph: ISO 100, f22, 1/20, 32mm) 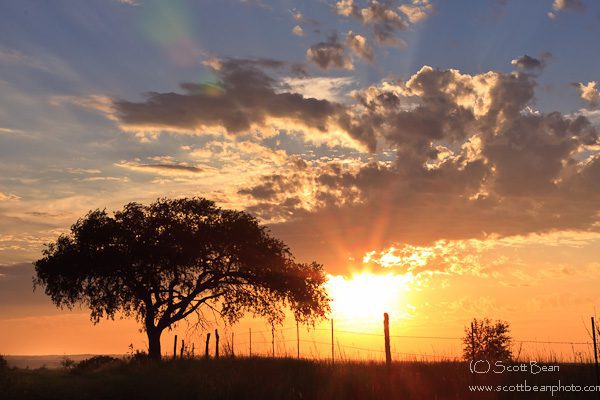 After shooting around the first tree we stopped at, I moved on down the road to this next tree.  By this time, the sun had broken free of the clouds and was very bright. No chance now to record it as a ‘star burst’, but the color of the sunset was intensifying.  I zoomed in tight on this tree which I thought looked good beside the setting sun.  I’d like to say that I really thought about the composition and carefully arranged all the elements in it.  I’m an instinctual shooter though and I react more to scenes than I think about them.  Something I’m working on, but that is for another blog post. (tech stuff: ISO 100, f22, 1/30, 45mm) 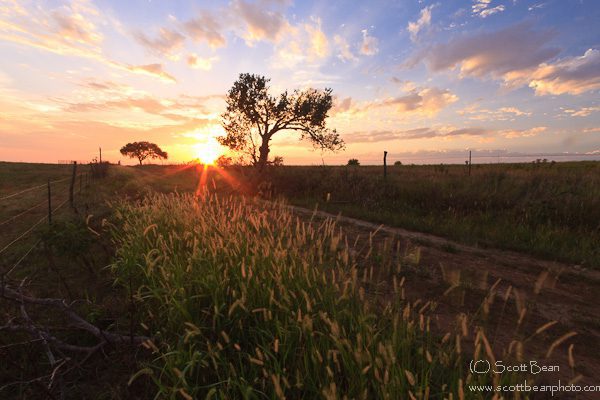 After working both these two trees, I decided to switch to my ultra wide angle lens (my 10-22mm) and try some wider shots.  With wide angle lenses, the foreground becomes very important.  I liked the way the setting sun was illuminating the grasses in the area so I got down low and right above the grass with my lens at it’s widest setting for the above shot.  Again, I used the smallest setting I could on my lens (f22) to get the star burst effect on the sun just as it was going below the horizon.   As with most of the photographs I took on this evening, I bracketed my exposures so I could put together HDR’s when I got back home.  However, there was just enough of a breeze that I couldn’t do that. You can see in this shot some motion blur in the grass due to the breeze.  To bring out the foreground detail in this shot, I processed the raw file 4 times, creating a ‘pseudo HDR’.  In essence I darkened the shot by 1 stop, brightened it by 1 and 2 stops and combined those 3 ‘brackets’ with the original in Photomatix. Since I was using the same photo in each ‘bracket’, I didn’t have to worry about any alignment issues between shots.  I could have also used a split neutral density filter to achieve a similar affect.  I think this was my favorite shot of the evening.  (tech stuff: ISO 100,  f22, 1/2, 10mm). 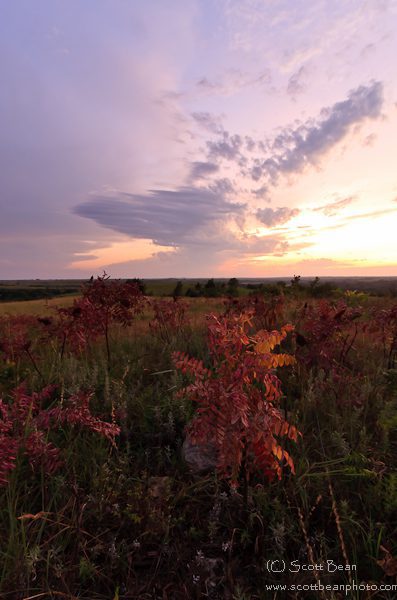 The sun was down and we were packing up to leave, but the clouds and the colors where still really beautiful.  I found this patch of sumac that was already beginning to turn to its fall colors and used it as the foreground in this photograph.  I could have just photographed the clouds with a dark foreground, but I don’t think that would have been as interesting. Even with a beautiful sky and beautiful light, don’t forget about the importance of your foreground object in a landscape scene. (tech stuff: ISO 400, f13, 1.0, 10mm).

After the sun was down and all the color had left the sky, we headed back to Waterville.  We made it back in time to catch the end of the John Wayne movie and have some chocolate chip cookies.  We didn’t get a chance for the MilkyWay that night, but it will still be there at the next dark of the moon.

Next time you head out the door with your camera, don’t overlook someplace you have been before or that is close to home.  Chances are your familiarity with the area will lead you to take some good photographs!

Below are a few more shots from this trip.  Mostly examples of how I was trying to ‘work’ the area and try variations on the subjects shown above. 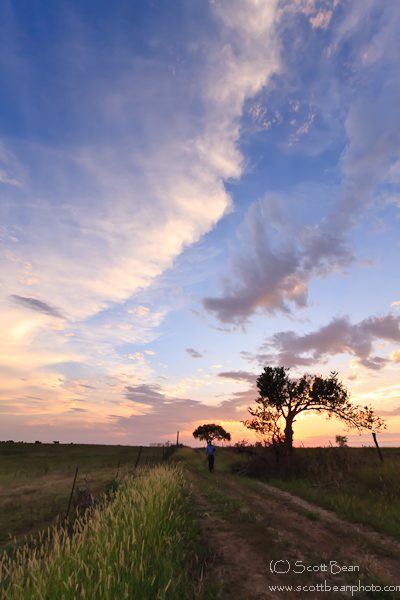 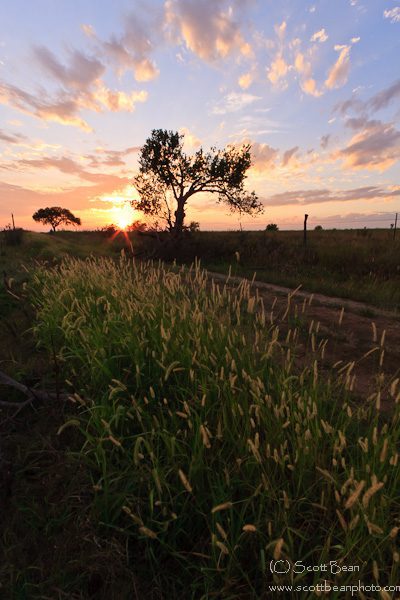 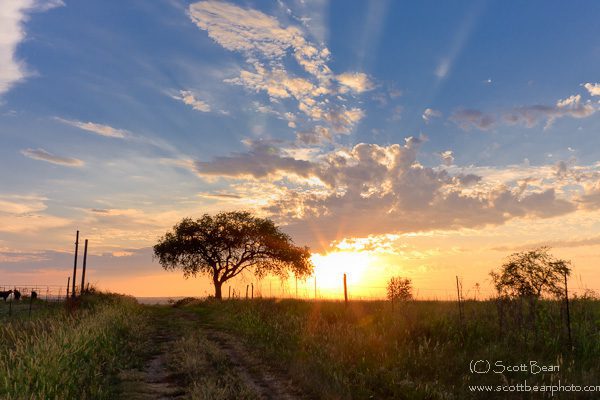 Category: BlogBy ScottAugust 20, 2010
Tags: kansasMarshall countyphotographySunset
Go to Top
We use cookies to ensure that we give you the best experience on our website. If you continue to use this site we will assume that you are happy with it.AcceptPrivacy Policy