Keeping everything in perspective 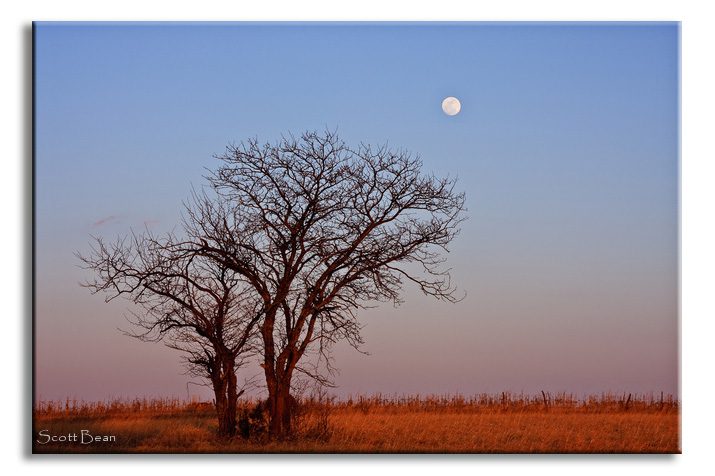 Earlier this spring I decided that I was going to head out to the ‘Broken Arrow’ section of Tuttle Creek Lake and do some photography along the shoreline there.  This section of Tuttle has some nice sand beaches, which is unusual for Tuttle (the shoreline is normally rocky). The last time I was in this area the light was fantastic and I had a blast photographing along the sandy shoreline.  This time things didn’t work out so well. I hadn’t counted on the water level in the lake being high and covering the beach.  I was frustrated as the high water level was ruining my plans! I had my mind set on photographing the sunset over the lake.  As I was driving back home (and grumbling mightily!) the moon started to rise and as it turns out I was in a great spot to photograph it.  Of course now I was feeling a bit sheepish for all the grumbling I had just been doing about how things weren’t going my way.  I found some interesting trees to place beside the moon and starting shooting, taking care to ‘fill the frame’ with trees and the moon.  After shooting several shots like the one above, I started thinking about other possibilities and composed some shots with the moon and the tree relatively small at the bottom of the frame: 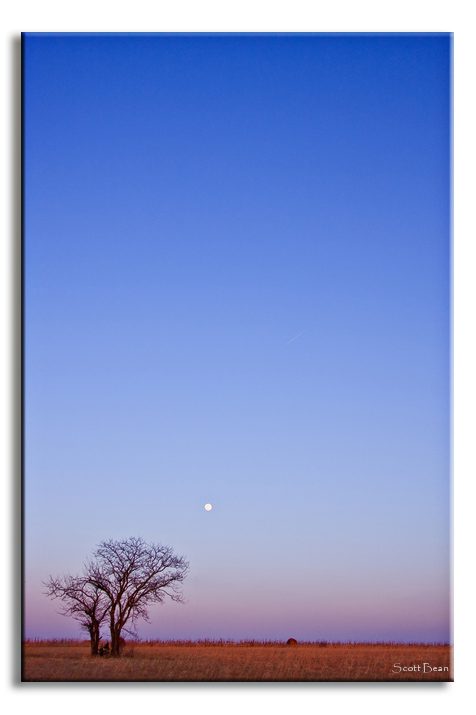 I felt this shot demonstrated how important it is to keep everything in perspective.  Here I was out on a beautiful evening doing something I love and because it wasn’t going exactly as I wanted it to I was upset.  However, things turned out great in the end (as they usually do).  Sometimes it pays to remember we aren’t in control and that we aren’t that important in the grand scheme of things…and there isn’t anything wrong with that.  As Alan Jackson says “It’s alright to be itty bitty.”

Photographically, these were relatively easy shots.  If you follow my work, you know I like to shoot the full moon and 1-2 days before the actual peak of the full moon the light is normally right to balance the exposure to record detail the moon and the landscape.  The first shot in this post was taken at f7.1, 1/100, ISO 100 with a 24-105mm lens set at 65mm.  The second shot was taken at f4.5, 1/100, ISO 100 at 24mm.  Both shots were made from a tripod.  The pink color starting to show in the second shot is the “Belt of Venus” the darker layer underneath it is the shadow of the earth.