We had some really strange weather Friday, heavy fog that stayed around most of the day and then light fog/haze that evening.  I was out at Stockdale Park scouting the location for a sunset shoot for one of my photography classes.  The fog/haze combined with the sunset was producing some really interesting light and colors as you can see in the photograph above.  The sunset wasn’t lined up very well with the cove for the photographs I had in mind, so I drove around the area looking for something else to photograph. 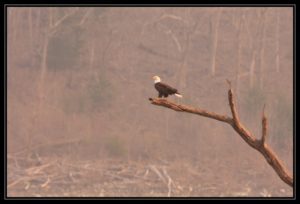 I was pleasantly surprised to find a bald eagle still in the area.  Last year I ran across a bald eagle at Stockdale early in the spring when most of the eagles had already left.

The eagle was really too far away for any close up shots, but I spent some time photographing it anyway, mostly as an excuse just to watch it.  I’m always fascinated with eagles (even though some people I know like to remind me that they “are just big birds”).  Eventually the eagle got tired of my spying on it and left.

About this time, the setting sun was just a red orb in the sky. I love evenings like this when you can photograph the sun as it sets without over exposing it.  I could have just photographed the sun in the sky, but without an interesting subject to go with the sun, that kind of photograph is well, less than interesting lets say.  I was hoping to find a really interesting gnarly old tree on a hillside that I could photograph the sun beside, but the area appeared to be out of gnarly trees so I decided to photograph the sun sliding down behind the tree in the photograph above.  It was a nice scene, especially with the cattle grazing in the foreground (for some reason I’m getting a lot of requests for photographs with cattle in them….).

I just couldn’t give up on the ‘gnarly tree’ photograph I had in my head so instead of heading back into Manhattan after making the photograph with the tree and the cattle I drove on deeper into the country side.  By this time though the sun was fading and was just barely visible in the sky.  My gnarly tree photo would  have to wait for another day. I did come across this pond, which I’ve always been interested in but never stopped to photograph until recently. I think this was my third stop at this pond in the last month.  It would have been great to have been here earlier in the evening with the sun still in the sky, but the colors of the sky and their reflection in the pond still made for a beautiful end to the day.

Category: AnnouncementsBy ScottApril 9, 2011
Tags: stockdale parkTuttle Creek Lake
Go to Top
We use cookies to ensure that we give you the best experience on our website. If you continue to use this site we will assume that you are happy with it.AcceptPrivacy Policy